although i'm the one in my family with the reputation as being the most insanely enthusiastic about christmas (i.e. i'm the only one who will play christmas music when i'm home alone; i also like to have something like miracle on 34th street playing in the background on the television while i'm sewing shirts at the temporary downstairs work station which is currently set up on bean's desk in the living room). however, m proved himself to be filled with holiday spirit by inviting a bunch of store-related friends over yesterday, over my grinchy protests.

the very idea of vacuuming the dog hair-covered dining room floor, cleaning the bathroom, preparing snacks, and chatting with anyone at all was sending me into full-blown anxiety attack mode. january or february was seeming like a much better time to invite over a bunch of people we've been thinking about having over for three years. i like to plan ahead, too, and m's much more spontaneous. i was consumed with thoughts of all the things i need to accomplish in the next two weeks...if you imagine me lying on my back, hyperventilating, while m calmly vacuums the dining room rug, runs to the store for pita chips and hummus and chips and salsa and veggies and dip, pops popcorn, cleans the bathroom, brews water for tea, pours glasses of apple cider...you'll have a pretty good idea of the scene. actually, i did eventually pull myself together, and i even baked three dozen beautiful cupcakes, and i soon realized that m invited all these people over because they're all really nice and interesting and we've been meaning to have them over forever. it was really great fun. i eat my words. 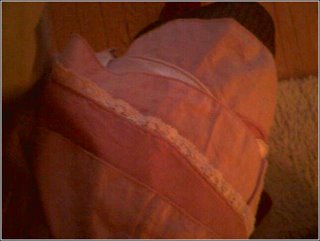 i even put on my party skirt.
Posted by Liz Woodbury at 5:54 AM

you lying on the floor while m vaccums around you is a pretty funny holiday scene.

yeah, it's kind of a perfect scene! it was fun -- i know you know what i mean about the urge to hibernate vs. the realization that i actually like talking to people...