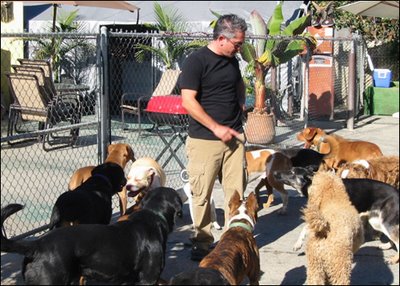 i know he's controversial, but i can't help but love caesar millan. there was a great article about him in a recent new yorker (i almost missed it -- i found it crumpled and dirty on the floor of the back seat of my car yesterday and read it while waiting to pick boo up from school). i spotted this on never go home, malcolm gladwell's follow-up to the article (he also wrote a really interesting piece on profiling pit bulls a few months ago). the fascinating thing about the dog whisperer article was the whole idea of "movement analysis," with dance instructors watching videos of millan working with dogs and interpreting the way he moves: his speed, the way he holds and moves his arms, whether he squares his shoulders or crouches, even what his eyes are doing. and the idea that dogs are unique in the way they "read" people's body language (they do it better than chimps, apparently).

plus, caesar has a 90 percent fabulous story (the part i hate is that he was pretty mean to his wife until he started treating her more like a dog -- the "psychology of women" or something, yuck). still, he might belong on my cute list...
Posted by Liz Woodbury at 7:13 AM

ooh, i can't believe i missed this in the ny'er - did you see the interview in the sunday NYT mag? it was great !
i never heard the treats his wife like a dog thing...that is not good...hmmmm

do you still have that nyer? i can bring it to you on sunday if you've misplaced it!