Readers May Find Portions of this Post Extremely Objectionable

If you're a sensitive soul, the following photographs may cause you to feel woozy and nauseated. At least this first one: 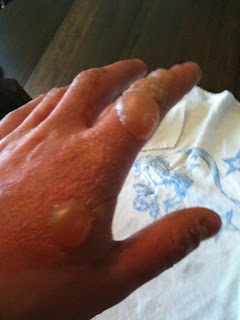 See what I'm saying? That is Isaac's burned hand on Day Two, grotesque enough for a horror movie. For the first few days, the blistering got worse and worse (we got to see what was going on each time I changed the dressings--most of the time it was completely covered with gauze).

A week later, the blisters had gone down (he managed not to let any of them pop, which the doctors were really happy about, since the blisters themselves are gross but noble agents of healing and guard against infection, as long as they are "intact"). What remained was not attractive, but an improvement: 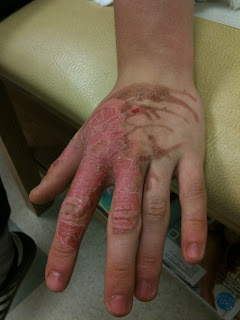 And then, less than 48 hours later, this is what his hand looked like: 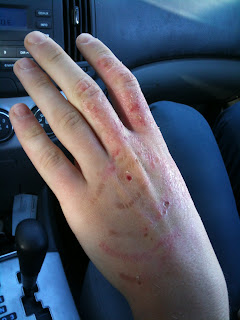 Amazing, right? The human body is a fairly wondrous thing, isn't it? Isaac was planning to visit Zoë the morning after his run-in with the pan of bacon grease, and obviously that didn't happen. So he and a friend are taking the bus to New York this weekend instead, staying until Tuesday so they can participate in some May Day Occupation (and document it, for the Learning Shack and Blunt).
Posted by Liz Woodbury at 11:49 AM

Wow! That's a pretty miraculous improvement! And I'm so glad he's getting to go to NYC.