apparently, while in some kind of fugue state, i requested a ridiculous number of books from the library (twelve? fifteen? something like that). now i've got a pile beside my bed as tall as a toddler and a reality show inside my head in which i have to read each and every one before they're due back at the 'brary. most challenging will be 2666, which i'm reading with my tiny book group, and which is 900 pages long, and which i've already renewed twice.

this morning i watched a bunch of little kids watching a worker who was standing in a deep hole wielding a shovel. i love how fascinating that kind of thing is to kids. i miss reading you can name 100 trucks!, even.

i love this dog, even though he barfed very quietly on a pile of my clothes the other night. 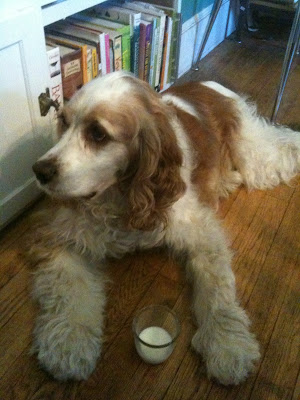 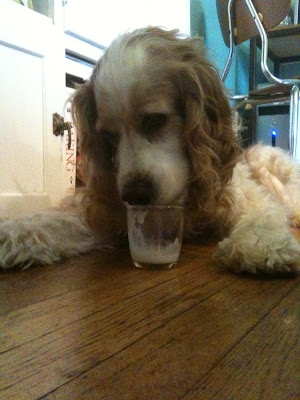 (above, his tiny serving of kefir, intended to stop the horrible gurgling sounds emanating from his stomach. it worked!)

today is picture day at the learning shack. i think i've finally shaken off the parental guilt that comes with not buying the resulting photos. i used to order the very cheapest package every year, even though nine times out of ten the picture is just bad, one way or another (an awkward pose, a defiant refusal to "show some teeth" resulting in a weird grimace. etcetera).

i made my mom laugh recently by referring to the white satin-uniformed women in a feminine hygiene commercial during project runway as "menstrual scientists."

i moved some plants around and drew pictures so next year i (maybe) won't make the mistake of pulling up perennials and allowing weeds to flourish, fooled into thinking they're legitimate. 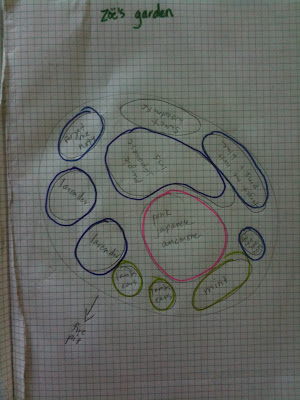 we have such nice dirt in our yard. it was pretty great to dig in it all weekend. also, i finally turned the compost!

I used to think the land
had something to say to us,
back when wildflowers
would come right up to your hand
as if they were tame.

Sooner or later, I thought,
the wind would begin to make sense
if I listened hard
and took notes religiously.
That was spring.

Now I’m not so sure:
the cloudless sky has a flat affect
and the fields plowed down after harvest
seem so expressionless,
keeping their own counsel.

This afternoon, nut tree leaves
blow across them
as if autumn had written us a long letter,
changed its mind,
and tore it into little scraps.
Posted by Liz Woodbury at 8:39 AM

Oh my gawd, I'm having the same problem with the library--how sadistic are they to send everything at once, thus threatening to turn the excitement of a new book into a chore hanging over one's head? Aaaargh!

usually it seems like i have to wait weeks and weeks for books, so i think i went a little crazy last time -- and it just happened that they were all available immediately!

I want to see a photo of the pile of books.

Most ironic inter-library loan I currently have: a book called "Organized Simplicity," which is completely buried in books by my bed.

You are welcome to come over and read picture books any time here. I'll even feed you toast.

For Isaac's junior year pictures, they give the parent volunteers who help out on picture day free packages, FYI....he could just agree to pose in a spectacular fashion next year and you could put in a morning wrangling kids at the escuela, and, at the very least, you'd have a free package of unflattering photos of a very handsome boy!

thank you julie. i just may take you up on that. i think you'd be unimpressed with "100 trucks," though! and that's great advice, mama d! if only the boy weren't so unenthusiastic about the whole ordeal... i wonder if they'd let him wear the rabbit head.