my original plan was to wait until mark's birthday and surprise him with a donut extravaganza from the holy donut, which until this morning i'd only read about, hungrily. but his birthday is still three long weeks off,* and donuts were on my mind, and five dollars were in my pocket, so i headed over to the east ender after i dropped isaac off at school. weekday mornings after 7:30 it turns into a magical donut and coffee bar. i restrained myself: i only bought two of them, a ginger-sweet potato and a dark chocolately cocoa. 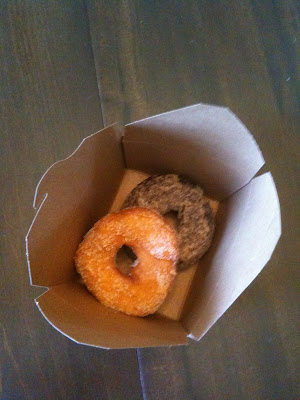 below, donuts for two. the flavor of the sweet potato donut wasn't as gingery as i'd expected, but the texture was light, sweet, melt-in-your-mouth--similar to a cruller. the chocolate donut was rich and decadent, more cakey. yum. 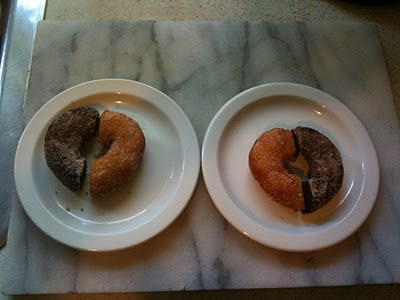 *and also, he's spent about forty hours** in the last four days fooling around with our stupid wireless router-something-something and other silliness*** and we both needed a DONUT, you know?

**not hyperbole, though i wish it were.

***that thing where when one thing gets fixed, something else breaks. and did i mention that mark fixed the broken furnace the other day? have you ever actually met someone who could repair plumbing, take apart and reassemble a furnace, install a dishwasher, re-whatever the computer network, and fix the brakes on the car, all while working sixty hours a week and even being the one to wake up in the night and clean up dog vomit? if you knew such a person, you'd want to buy him a donut, n'est-ce pas?
Posted by Liz Woodbury at 12:45 PM