the song of the world

we got an actual letter in our mailbox this week, thick and mysterious, with many indian stamps upon it! inside was this card: 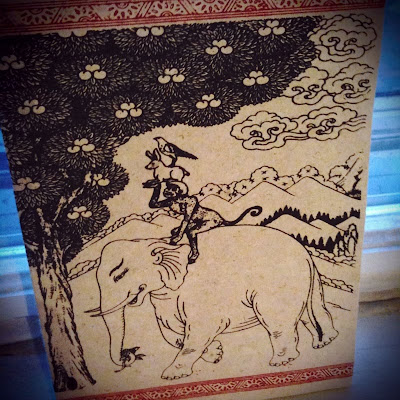 my favorite, peaceful animals stacked atop each other, peacefully. and, also, a tibetan prayer flag! an authentic tibetan prayer flag from dharamsala. this isn't where it'll live permanently, but i haven't decided yet where we should put it. it's funny, because mark and i just had a conversation wherein i said something like "i really want a tibetan prayer flag, but i don't want to ask them to get me one, because i don't want to add to their mental lists or the stress of things they have to do before they leave india, etc." and look, my prayers were answered! 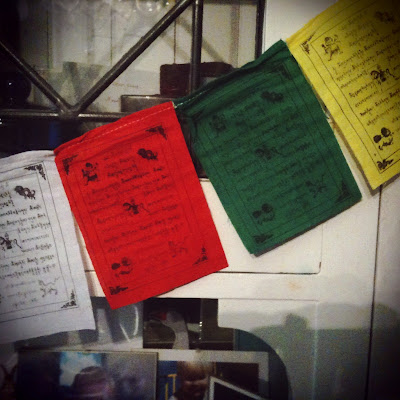 just wait til they have a chance to write in their own blogs -- there are fabulous stories of hindu temples in amritsar, goings-on near the border with pakistan (!), free food at the golden temple. speaking of food, they were both suffering from some degree of delhi belly the last time we spoke (they were in delhi, so.). zoë in particular wasn't feeling so good, and spent most of the time they were in delhi resting in their hotel room. their flight to hong kong arrived about seven last night (our time), and we're eagerly awaiting news that they made it and are feeling great, etc. one exciting thing about hong kong is that it's precisely twelve hours ahead of us, so it's always simple to figure out what time it is for them (as opposed to india, which was confusing). 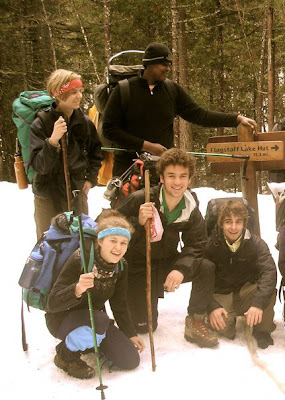 isaac, meanwhile, returned from his camping week on friday smelling ripe and looking very happy. he had a great time hiking and hanging out in the lodges, and he came home with this beautiful walking stick he found in the woods (pictured above), rubbed smooth at the top from the 35 miles or so that he hiked over the course of the week. i totally stole this photo from some kid on facebook.
Posted by Liz Woodbury at 9:13 AM

me too! i mean, sewing labels in shirts and watching tv and defining words and drinking tea is all pretty exciting, but there's nothing like a few authentic adventures to spice up a blog post!!

Speaking of excitement, tomorrow is the last chance to see Bill Cunningham New York at the art museum at 2:00. Peter and I haven't made it yet, so that's what we're shooting for! I hope I am not deterred by torrential rains!

It is so wonderful that they are having an adventure -- and not forgetting you back home.

it feels pretty nice not to be forgotten in the midst of their adventures!