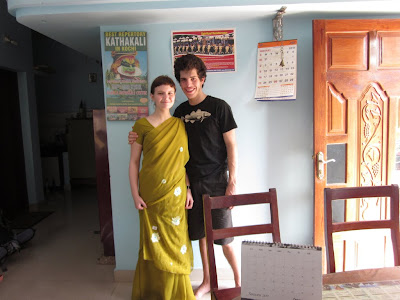 i chatted briefly online with these adventurers this morning. they were in an internet cafe in new delhi, after spending 36 hours on a train from bangalore. zoë reported that the trip was great, and that the time went by fast. they were in delhi for only about a day, and they'll be catching a bus any minute now to dharamsala. they'll spend sixteen hours on the bus, and then they'll be hanging out in mcleod ganj for a while. that's where the dalai lama lives when he's at home (which he is!), and it's home to many tibetan refugees. they will be looking up at the himalayas! it will be cold, or at least cool! the town is more tibetan than indian, so it's very much like going to an entirely different country. at least, this is what i've read about it -- i am pretty excited to hear their reports and see their photographs, once they get settled.

zoë made this gap year map that shows everywhere they've been so far, and it's kind of mind-blowing.


View Gap year trip in a larger map
Posted by Liz Woodbury at 9:23 AM

So cool! Ted and I keep saying we will plan a trip to India but it's hard to carve out enough time to make it worth it (for us).

you should do it, danni! they've covered all of this ground in not quite two months, and that includes 3 1/2 weeks working on an organic farm.

wonderful to see this update- I can't wait for the next part either - I hope they see a yak! now I am going to flicker to look at photos!!