we travel on our stomachs

i mean, not literally, but...well, you'll see. bean and i returned home last night after the fabulous final college tour of 2009. we had a great time and saw some lovely college campuses, but the best part was going home each night to hang out with these sweetie pies: 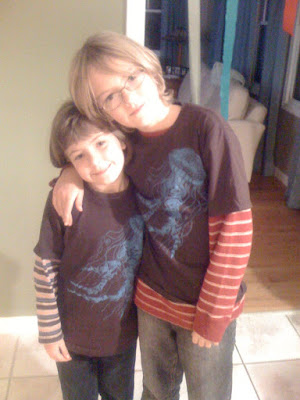 plus, of course, their dad and their mom, the amazing holly, who managed to cook us gourmet meals every night while in the midst of her busy weekday life (just for example, she leaves for work every morning long before the sun comes up). she also helped me finish up a secret crafty project that i've been procrastinating about for a long, long time. i can't wait to go back and stay with her when there's more time available for lounging around drinking coffee and talking, because she's one of my favorite people in the world to talk to. also, she makes the most beautiful jewelry you ever saw. i snuck and took a picture of her studio (soon to be expanded, since she's taking over the current "ping pong room"): 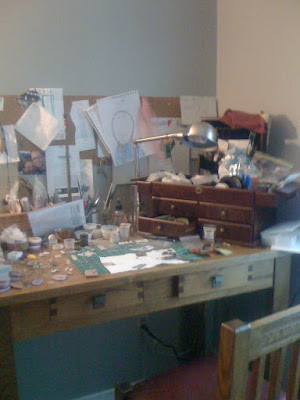 so, day one was vassar, where i neglected to take any photos at all. bean and i found a nice spot near campus for tea called the crafted kup (not krazy about that kute 'k,' but it was a sweet little place). our tour was great, the highlight being the indescribably gorgeous library with a nearly floor-to-ceiling stained glass portrait of the first woman to receive a doctorate. bean liked vassar, although she still thinks she would prefer to be in a large city.

day two we toured bard - our guide was from pakistan and had the most charming accent. bard was absolutely lovely, right beside the hudson river, with views of the catskills off in the distance, and farmland all around. too remote for bean. also, the director of admissions was played by jane lynch. seriously. it was bizarre. 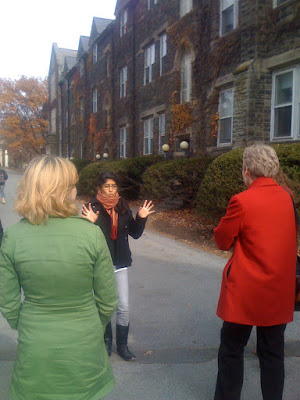 there are many charming paths through the woods at bard. 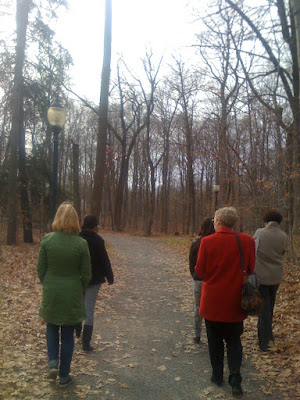 we drove to nearby rhinebeck for lunch at bread alone, where we had delicious white bean and escarole soup and an artichoke panini. 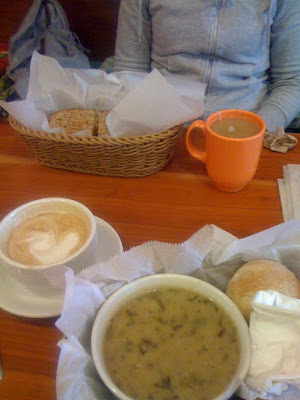 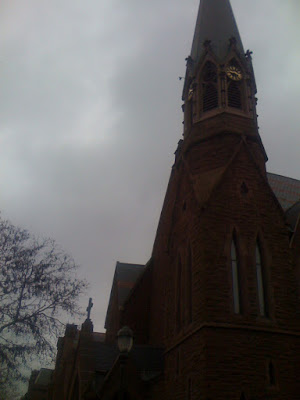 our tour guide, rachel, had the adorable habit of closing her eyes for long stretches.* the campus was great, and the town of middletown had lots of cafes and restaurants. we got a private tour of the rare books room at the main library from susie cupcakes, and stopped in at the german department (bean's usm german professor attended wesleyan), where there were no professors to be found, although we had a nice chat with the department secretary. 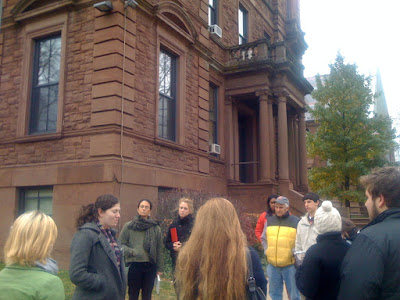 the best thing about wesleyan was the food at udupi bhavan, a southern indian restaurant we found nearby. 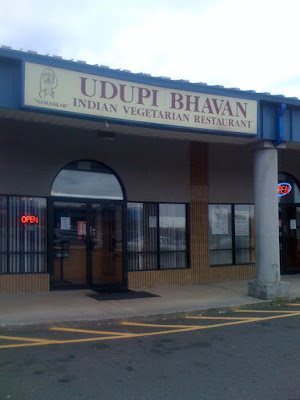 we shared vegetable pakoras that were like spicy indian beignets, so tasty: 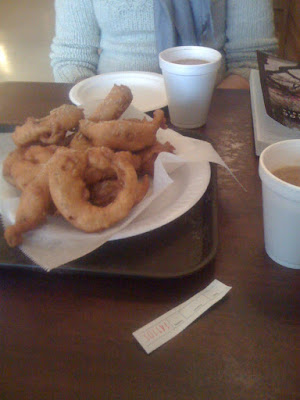 and we each got a different type of masala dosa (they're actually not this huge, since they fold up around the filling to be about the size of a burrito). they came with coconut chutney and sambar, yum. 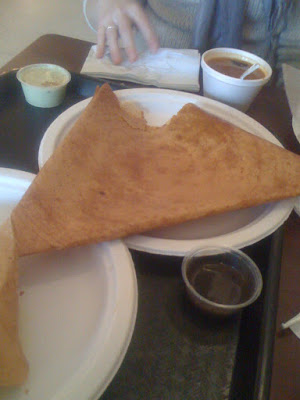 next we went to connecticut college, where our tour guide just happened to be from portland, maine! we walked around in the pouring rain - it was raining so hard that it was difficult to even see what the campus looked like. 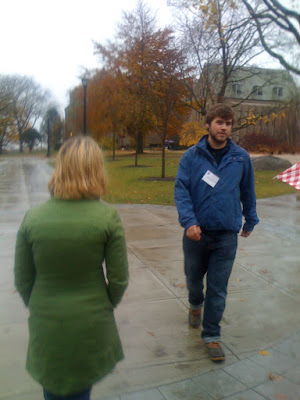 on saturday, we were signed up for a full day at sarah lawrence, but we ended up cutting out early after a very long info session. the campus was lovely, and the people seemed wonderful, but bean was certain almost immediately that it wasn't for her; she wants a college with at least a bit more traditional structure, and preferably one that's larger.

on our way home we stopped at rein's deli in vernon, connecticut. 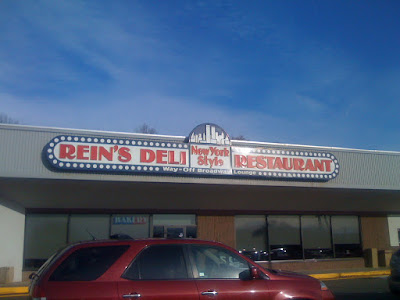 bean had a veggie reuben and i had a potato knish.


and when we got home, look what was waiting for me: 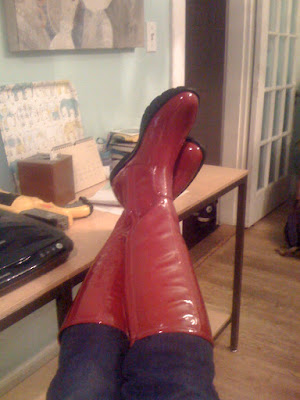 *all of our tour guides walked backwards except the one at wesleyan. "that's dangerous," she said.
Posted by Liz Woodbury at 3:16 PM

Can I please go with you to Holly"s house!!!

Matt and I used to live near Bread Alone Bakery. So good!

yes, emily come too!
ugh...that worktable is a disaster! i'm actually quite productive at the table, even in that state, but it doesn't look like it!!!!
we LOVED having you guys! friday night evan whispered to me "i wish they could stay a few more days!"
xoxo

i'm sorry, holly, maybe that was the equivalent of you sneaking into my dirty bathroom and snapping a photo, but i love that room and i love your worktable. it's all so exotic to me!!

oh, that's ok! and you could snap my dirty bathroom and i wouldn't mind either!
xo