a week with many friends

this week was full of friends, both real friends and "friends." we referred to our roofers, insulation guys, window guys, and contractor as our "friends."* m even gave them each a nickname (the two i can recall were "think safety" and "bandanna"). it was awkward having them around, but it sure was worth it. here are some of the new windows in our sun room, which we now need to paint, but which are otherwise complete: 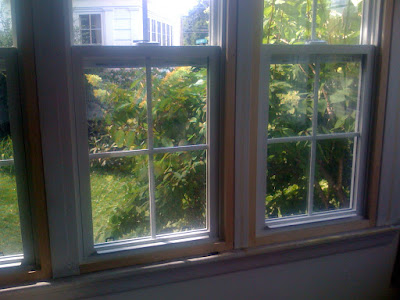 and the same windows from the outside: 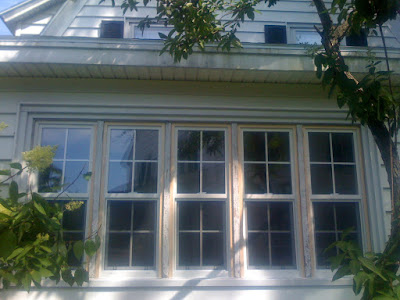 also this week our good friends from baltimore, susan, erin, and sylvie, came to see us for a few days. erin is bean's very oldest friend (they met at preschool when they were three and spent their days painting together, mostly elaborate mashups of sea creatures and planets). susan and i would trade babysitting a few times a week, and i used to love pushing baby boo and baby sylvie around in a double stroller and having people ask if they were twins.

bean, boo, erin and sylvie have a tradition that's lasted about six years now: every summer, they create a restaurant at our house or at susan's house in baltimore. we take them to the grocery store with their list and buy the ingredients, but otherwise, they put together a meal from start to finish and serve us in a separate room. this year, the restaurant was in our newly tidied up sun room, and the theme was "fancy schmancy." they served us an 8 or 9 course meal, and it was amazingly delicious. like, you would pay good money for this food. here is the first course, stuffed mushrooms: 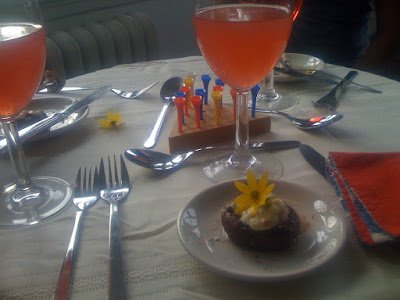 and here are three of the four chefs (the fourth had fallen asleep on the couch due to his hard work and aching teeth) with dessert, a vegan peach cake with raspberry filling and blackberries: 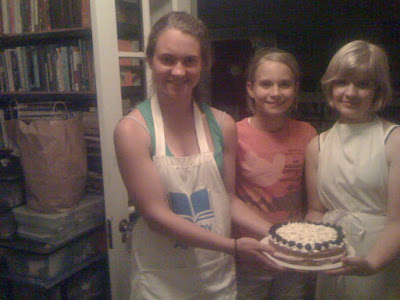 *we were able to have this work done on our house (all of which is directly related to energy efficiency) thanks to the portland owner occupied rehab program, which is a really amazing (and i think underutilized) option.
Posted by Liz Woodbury at 5:27 PM

I am pretty sure that almost directly after reading the post where you talked about the work on your house, I drove past your house and recognized it, which was one of those weird internet/reality mashup moments. Careful, though--now I know where you live and might show up at any time. ;-)

i love having nice stalkers - and anyway, i know where YOU live, too!!