yes, the newspapers were right: snow was general all over portland 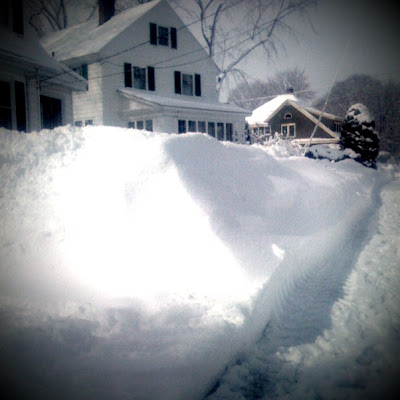 boo got himself one last day of respite before going back to school, and m and i got to shovel some more heavy, damp snow. i'm not complaining. really. but look at it, would you?

good thing there was a snow day, too, because we stayed up til midnight watching the oscars. there were so many great moments: tina fey and steve martin; ben stiller's joaquin phoenix impression; hugh jackman's opening number; sean penn's win and his speech; adorable indian children; phillipe petit's magic trick after man on wire won; and many, many more. there were of course some low points, namely the inscrutable song-n-dance routine thrown together by baz luhrman (supposedly - he didn't look ready to take the blame for it when they showed him in the audience). i was also disturbed to note the matching smooth-as-molded-plastic foreheads of angelina jolie and nicole kidman. boo won our family oscar pool by one point. we were all very happy about slumdog's eight awards. even though i'd imagined a soiree with samosas and cups of chai, we feasted instead on chili and cornbread with the dancer family, who departed early due to the frightening weather.

today i scored some cheap snow boots at goodwill for boo, who, i'll now confess, has made it thus far throughout the winter sans boots. now he can help with the snow shoveling! we took minnow back to the beach, where he tried hard to befriend this small flock of geese a few times: 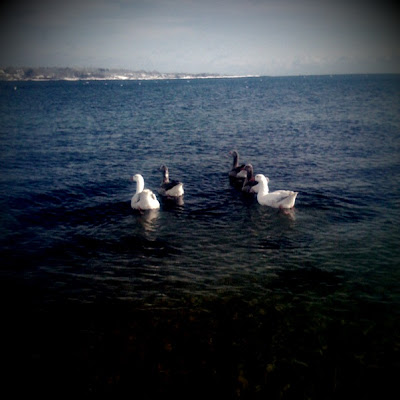 they kept honking rudely and turning their backs, though.
Posted by Liz Woodbury at 5:03 PM

sniff sniff...wish I'd been there - but I guess I don't miss the shoveling! glad boo has boots (boo boots) xxxooo
btw, i want to talk to you about man on wire, which i did not love as much as i was supposed to - the man reminded me (in a bad way) of roberto benigni)

oh no, we just watched man on wire last night, and i did like it -- i can see what you mean about roberto benigni, but i did like him (phillipe, not roberto).