the first night of the democratic convention

i seriously neglected the olympics the last couple of weeks, unlike some people i know (it seemed like every time i turned on the tv, a relay team would be dropping the baton or something horrible like that. i was afraid to watch too much platform diving for fear i'd see a diver hit his head on the platform. i did watch shawn johnson get her gold medal, which was adorable). instead, i plan on watching the democratic convention as if it were my own personal superbowl. so, last night i know ted kennedy was the emotional highlight, and i did get a little teary-eyed listening to his speech. i enjoyed hearing the pbs historians put him in the category of one of the most important five senators in the history of the country, too. after that, i watched some guy who used to work with barack and some republican guy who's going to vote for him. then it was michelle's turn: 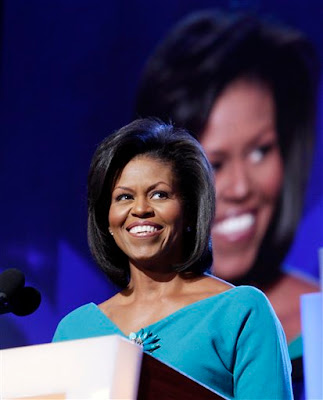 
i thought she did amazingly well, and i am looking forward to having her be first lady. she strikes me as so smart, honest, and fiercely strong. and she loves her brother. here, in my expert political analysis, are the only things that bugged me:

* she's a "patter," not a real hugger. or maybe that's how you're supposed to hug somebody on a stage at a political convention, but i wanted her to give her brother a better hug after he did that nice intro for her.

*her very very slightly asymmetrical neckline kind of drove me crazy. it would make me itch to wear it. the color was only okay.

*i hate that she had to emphasize how much she loves this country, and say "god bless america." oh well.


but that's it as far as complaints. their kids are going right on my cute list -- it was adorable when sasha said, "what city are you in, daddy?" they seem like real kids. i hope life in the white house doesn't ruin their lovely childhoods. cause i am feeling optimistic about this president obama thing.
Posted by Liz Woodbury at 9:42 AM

OK, here's the take on her speech from 101 Austin: we thought her brother was a great speaker (didn't notice inadequate hug); Peter thought her shoulders look like the Olympic swimmers'; we were struck that she never said "um" or anything like that; wished the kids had said something other than she "did good", but thought they were darling. Also very excited about an Obama presidency even though we initially favored Hillary....