i've been lured back to the world of dairy by this insidiously delicious goat milk yogurt: 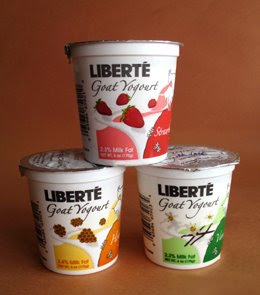 for real, this stuff is so good. and there's a whole world of amazing yogurt out there, especially at the fancy store. bean and i bought a selection of bizarre/delicious yogurts there yesterday, and both the cashier and the bagger practically waxed poetic about their favorite flavors of yogurt (including water buffalo yogurt, which is indeed quite tasty, and which the woman bagging our groceries claimed was well loved by her dog, too. wait, she feeds her dog yogurt?).

there are two real reasons for me dipping my toes (metaphorically) into dairy products: first of all, bean is assuming that she'll be unable to stick to her veganism while she's in germany next year -- she may not even be totally vegetarian. it's something that she did a lot of thinking about before she applied to AFS, and even before that. the idea of being a polite guest in someone's home, as well as immersing herself in another culture, is more important to her than sticking literally to her veganism. so she's easing up a bit, and i'm keeping her company.

the second reason i'm personally such an unorthodox near-vegan is that i feel better when i eat very small amounts of dairy and eggs. i really do believe strongly in the ethical arguments for being vegan, and i also believe you can be incredibly healthy on an all-plant diet, but personally, i physically feel better when i'm a little flexible with it.
Posted by Liz Woodbury at 8:17 AM

yeah, those are yummy too.

Chez nous, we love the Liberte and Wallaby as well as Fage (sp?) Greek yogurt. The only bad one we've found at Whole Foods is a very expensive Icelandic yogurt...disappointing! It's interesting that you feel a little better with a little dairy.

I ate wienerschnitzel when I was in Germany. I ordered erben suppe and the wienerschnitzel was floating in the middle!! But I ate it anyway, telling myself that it was a way to experience the culture. It tasted like a hot dog.

Adam tried to order just sauerkraut at a restaurant in Bad Homberg and the waiter wouldn't even serve it without wienerschnitzel. I don't know if he ate the wienerschnitzel or not. He has been more of a strict vegetarian that I have. I used to eat turkey once a year on Thanksgiving at my Dad's house, but gave that up when I was introduced to Tofurky! Now I make my Dad cook the Tofurky for us.

mmmm, tofurkey. i said that in a homer simpson voice.

i've been eating a lot of yogurt for the last week or so -- i, too, love the 6 grains liberte yogurt. i also love the liberte plum and walnut (although i'm pretty sure that one is whole milk yogurt; it tastes like whipped cream, in a good way.) which skyr did you dislike, mama d? i've tried both of the whole foods kinds. i really liked one, and the other definitely seemed like an acquired taste, it was so bitter.

whoops, sorry. that was me.

I can't remember which one I disliked--I just know that it was expensive and disappointing. But plum and walnut is another story!