bean got her host family this week! she is going to be staying in a smallish town in the southwest part of germany near several small cities and about 45 minutes from stuttgart (a biggish city). she's going to be in the state of baden-wurttenberg, smack dab in the black forest. her family has a mom, dad, 19 year old brother, and a 16 year old sister, who bean has emailed a couple of times. she really won't see the sister, since she will be on exchange in the u.s. next year. i like the idea that her host parents will be in the same boat m and i will be in -- their daughter will be depending on the kindness of her u.s. host family, just like we're hoping these people are really, really nice to bean. she also received a lovely email from her host dad (hans-peter). as you can imagine, she's psyched!

(i can't help but wonder if she was selected the way exchange students seem to be in the u.s. ... from what i've observed at afs events, it's kind of like picking out a puppy -- you look through piles of papers with information about each kid and pick the one that makes you go, "awww! look at this one! can we keep her?")

to celebrate, we baked a black forest cake (schwarzwälder kirschtorte), which is a layered chocolate cake with whipped cream (vegan, in this case) and sour cherries between the layers. it's often made with kirsch or other cherry liqueurs, but we used the juice from the sour cherries. yuuummm. 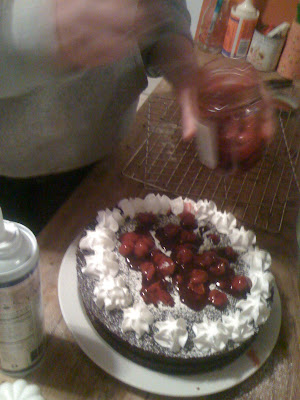 above, bean finishes the cake. below, the cake in all its glory: 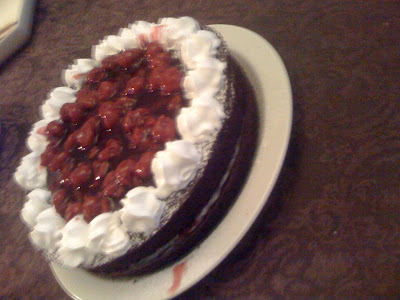 i also attempted some brown rice sushi (1. no, it has nothing to do with germany, and 2. i have done it successfully in the past), which came out so weird. for real, spreading the rice on the nori was like spreading oatmeal. i think i added way too much water to my rice, yes indeedy. the consistency was totally wrong, but i found it pretty delicious nonetheless. 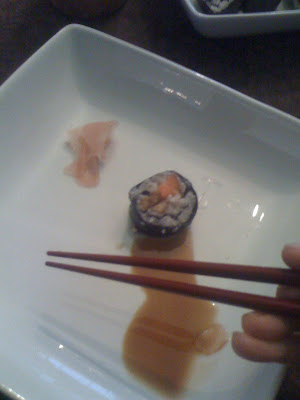 on tuesday, m and bean canceled the trip to view colleges that we'd tentatively planned (bean's head is in germany, not college!) and went and climbed a mountain instead. boo and i stayed home -- i was nerdily nursing my aching back, but i rallied and "played tennis" with boo at deering oaks. we had fun: 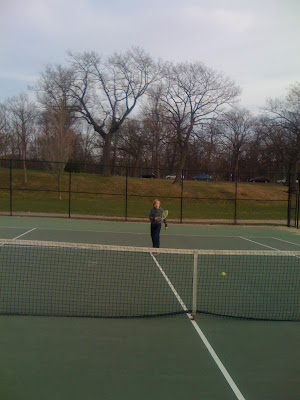 I'm so excited for Bean! And I really like the fact that her Dad's name is Hans-Peter! Peter and I were just looking up Birkenfeld in the atlas, and we like the location a lot.

must be nice to be able to visualize where she will be.

i'm pretty excited too -- we're instructed to have "zero expectations," but it feels like a good place for her, and a good match.