the story of a cassoulet

i've veganized a basic cassoulet recipe, and it is pretty delicious (since i'm improvising and not working from a recipe, it comes out slightly different every time i make it -- more and less scrumptious, but always very tasty). here's how to do it:


buy yourself a package of tofurkey italian sausage, slice it up, and saute it in olive oil until it's brown all over. 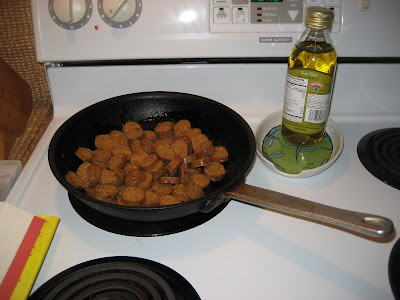 real cassoulet has all kinds of animal parts in it, so you can add as many fake meats as you so desire -- i used some chicken-style seitan, also browned up in olive oil. 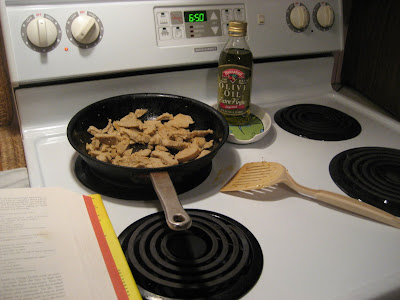 next, chop/dice a medium onion and two big carrots, and saute them too (adding more olive oil if you need it). if there were celery in there, we'd call this a mirepoix, like back in old paree. no, actually on top chef. and you could add celery if you wanted to! 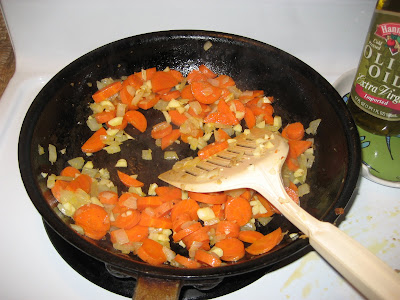 add to this almost-mirepoix (after onion gets translucent) two cans of white beans and a tablespoon or two of fresh thyme. also salt and pepper to taste. and then some chopped garlic, the more the merrier. finally, add tomatoes in some form (i used about a cup and a half of chopped canned tomatoes, but i think i like this better with some saucier version, like crushed tomatoes or even tomato paste), and one to two cups of liquid (i used part red wine, part veggie broth). cook this up for a while, until it tastes great. 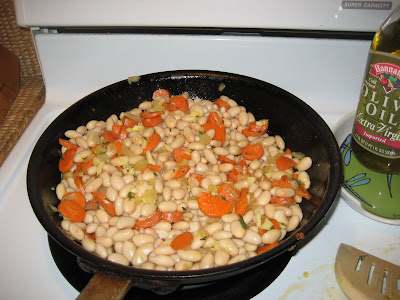 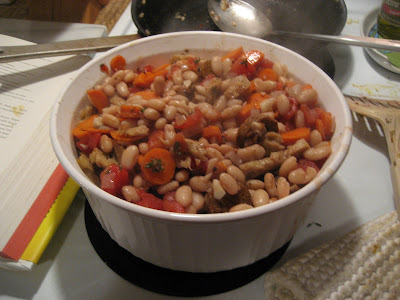 it helps if you have a loyal dog by your side (totally fooled by the fake meat): 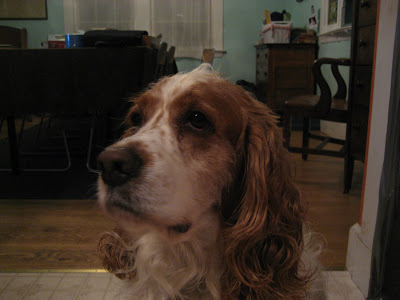 bread crumbs on top (i made them fresh in my food processor -- you can also mix them with chopped fresh parsley): 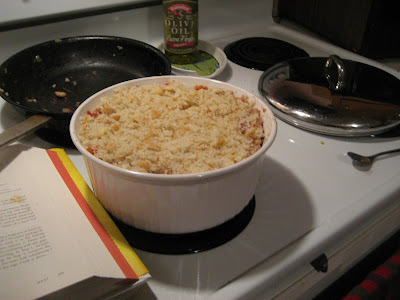 bake it at 350 degrees for about 20-30 minutes, until nicely browned and bubbly. yum. sometimes it comes out a little too dry. it's at its most delicious when it's all saucy and creamy, which is why i think i prefer the smooshier tomatoes. also, don't be afraid to have some liquid in there when you put everything in the casserole dish. yum. serve with crusty bread or maybe a dark green vegetable or glasses of water. did i already say yum? 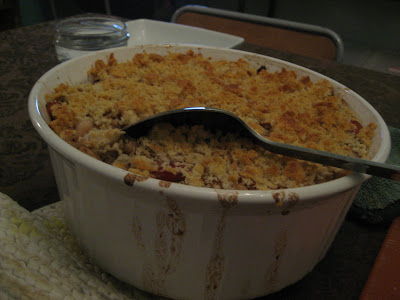 Gee, your stove is really clean. I was more impressed by that than the food, not that it didn't look scrumptious.
Living in a pit,
Dancer Lady

thanks, Liz ! I've been wanting to get that recipe from you ever since you told me about it ! I'm sure it will be more successful for me than the carrot soup I made today (from a recipe calling for 1 can of jalapeno peppers - against my better judgment, I put em in there & it was AWFUL - took me back to the
thai takeout tragedy in the winter of...99 ? YOU remember !

Are Oven Is Purty

there's a story about the cleanliness of my stove, but i'll save that for a later blog post...

mom, i'll never forget the thai takeout tragedy of '99. my mouth is burning just thinking about it. i'm awful sorry about your soup.

[that would be me, yumming] -Pop

oh - yum - i might give that a try. what kind of fake sausage do you use?

i love the tofurkey fake sausages!

welp, i just put it all together, following all the instructions...so far, so good....everything even fit into my casserole dish...now to pop it in the oven & wait ! yum yum! smells good enough to carry along to a picnic at Lake Pushaw !

still looks good in 2015 - but Minnow makes me cry