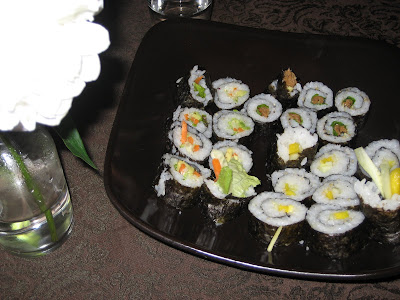 a few nights ago, bean and i made a heap of vegetable sushi for dinner. i must admit, she did most of the work (and all of the rolling). it was scrumptious: fried tempeh, cucumber, carrot, avocado, lettuce, spinach, mango, chinese gluten, and vegan wasabi mayonnaise, all in various combinations. yummmm.

so, it's been hot. i've mostly spent the last few days being hot. bean has been to the beach, boo has been on some bike rides, m and bean have watched a bunch of o.c. episodes, boo has played with leander. last night i went to the movies to see away from her, which i discovered was no longer playing, so i saw knocked up instead. i mostly enjoyed it a lot -- due in no small part to all the freaks & geeks and undeclared alumni in supporting roles, as well as the funniest character of all, played by kristen wiig -- but i couldn't stop thinking about what my mom told me about the film being co-opted by anti-choice groups. it was heavenly sitting in the air conditioned theater for two hours, and i can't wait to do it again this weekend, when we get to see ratatouille at last!
Posted by Liz Woodbury at 1:07 PM

oh - i loved freaks + geeks and undeclared and loved that movie (and think that guy is kinda hot). did not know about the anti-choice thing. those fuckers ruin everything.

i wish i didn't know about the anti-choice stuff before i saw it, because i would've enjoyed it more! but i also love seth rogan.

no way!! you're the original recipient of the best mom award, as far as i'm concerned!

aw, thanks, my sweet pea girl...xo