it's surprisingly exhausting being a stage parent. i was grateful that yesterday was a holiday, because i was tired after running bean around all weekend, getting up early to drive her to locations, staying up late to film a scene in our basement (involving a grave, a creepy mourning woman (me), and bean climbing out of the dryer)...

so here are a few behind-the-scenes shots of the video shoot: 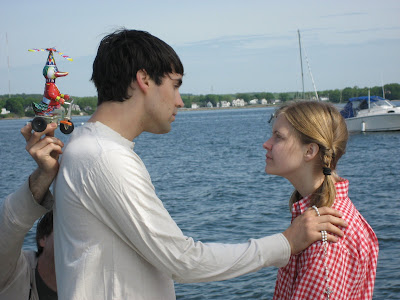 although it looks like chad is asking for her hand in marriage, it's actually more of a baptism situation. see that wind-up duck-on-a-bicycle on chad's shoulder? that plays an important part in the video. 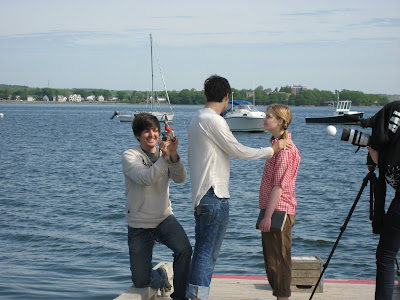 a class of children in an empty lot: notice who's teaching them? 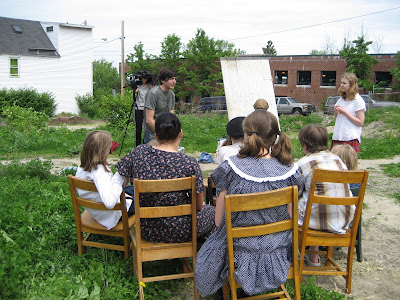 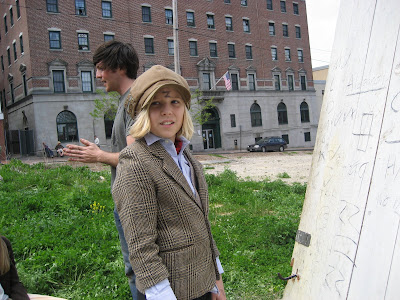 this scene was filmed on his birthday, contributing to the fun whirlwind of a day -- a little acting in the morning, some zombie kickball in the afternoon, and an evening of opening presents, feasting on indian food with friends, eating cake, and playing 1,000 blank white cards.

and you'll also enjoy this song, bean's current fave.
Posted by Liz Woodbury at 5:54 AM

wow, what an awesome birthday! thanks so much for the extremely fun weekend, too.

thanks for lending your acting skills!

can't wait for the outtakes !!!