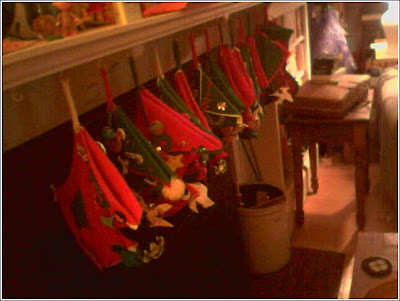 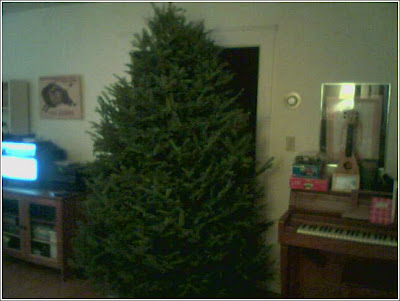 but now for the happy news: it's a new year! i give 2006 extremely mixed reviews, and i'm hoping for much better in 2007. to celebrate this possibility, the four of us left these sad reminders of holidays past and spent new year's eve in boston with mom and dad, viewing ice sculptures: 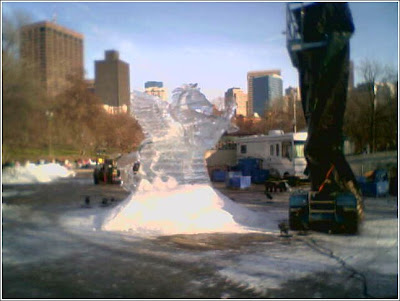 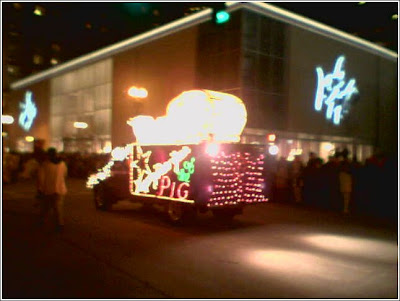 (sidenote: behind the happy year of the pig float, observe the department store whose name i interpreted for most of my childhood as "lloyd and floyd.") 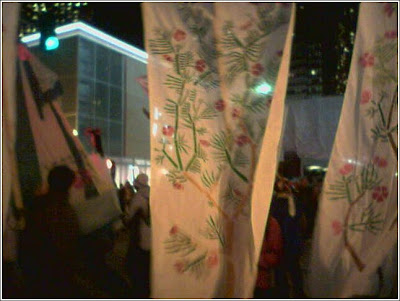 the chinese new year was exuberantly celebrated just a little bit early, with many-peopled dragons and a year of the pig float. there were crazy little ragtime brass bands and giant puppets and happy people skipping along, sticking shiny silver stickers to the faces of parade-goers. after the parade, we went back to mom and dad's and played games, ate rippled salt and pepper chips and vegan onion dip (and lots and lots of other things), and fell into a sleepy pile watching "waiting for guffman." only bean, boo, and i made it to the end, but even we crashed before the stroke of midnight.

first words this morning: rabbit rabbit. solemn vow and resolution: don't ever eat so many chips and so much onion dip ever again. ever.

all six of us went to grasshopper in allston for lunch, where we discovered that it was closed for a private party. we were sad, plus we were standing in the rain. we were cold and hungry. and did i mention, wet? m boldly knocked on the door and asked if we could come in and join the private party. the president of the boston vegetarian society said yes, we could! she quickly explained how the menu worked (we paid no attention, we were so surprised and happy to be inside a warm, dry, delicious-smelling establishment). the wait staff proceeded to bring enough food for twenty or twenty-five very hungry people to our table. and i'm not exaggerating a bit. it was scrumptious, savory vegan vietnamese food, so delicious, and there were plates propped upon each other, and every time we thought they were done bringing us food, there'd be two more huge platters of sauteed veggies and seitan and sauce or sweet-and-sour gluten with broccoli, or wonton soup, or veggie tempura... at the end, they presented us with many carry out boxes, and i think we'll be pretty much set for food for a few days.

so happy happy 2007, she said optimistically!
Posted by Liz Woodbury at 8:18 PM