how can you be in two places at once 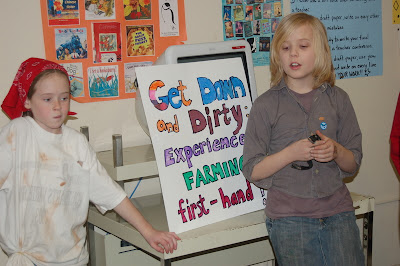 it was a busy evening around here; while boo was participating in a "maine state fair" at school (where he was representing the honorable potato), bean was reading a radio edit of her outward bound memoir at salt.

i fetched bean and artemis early from school so they could check out boo's state fair (they presented it during the day for some other classes at school, and again at night for parents). it was really impressive and elaborate, with games and prizes and all kinds of great dioramas and displays. boo's included a potato game where you had to scoop up a whole big basket of potatoes, rush over to a barrel, and dump 'em in. as fast as possible. i'm too modest to mention here who the champion of potato-dumping is...


then tonight, m took boo back to school for the continuation of the state fair, while i went to salt to hear bean and her fellow writers read their work. her story is hilarious, and brilliant, and she did a great job reading it to an extremely appreciative audience. *here she is smiling with artemis, who read a couple of pages from her (longer, fictional) story -- also hilarious, and kind of magical. i was so impressed with most of the stories, poems, and memoirs (including beautiful poetry by jukado and miss gliss). one of bean's classmates is somali, and her story of life in somalia and a kenyan refugee camp, and her family's move to portland, had the audience (including me) weeping. it was a really lovely event.

*photo removed as per lady blogger code of ethics.
Posted by Liz Woodbury at 9:46 PM

ooh, wish I'd been at both events!

one thing *somlian she was somalian and two that picture is the WORST picture of me EVER!

i like when you correct my grammar, cutie pie.

do you want me to take the photo off? i am a lady blogger and go by the lady blogger code of ethics, so i'd be happy to either crop you out of it, or remove it altogether. just say the word. or, alternately, you can put an ugly picture of me on YOUR blog!

yes i would like it if otherts didn't refer to me as dracula the undead. thank you