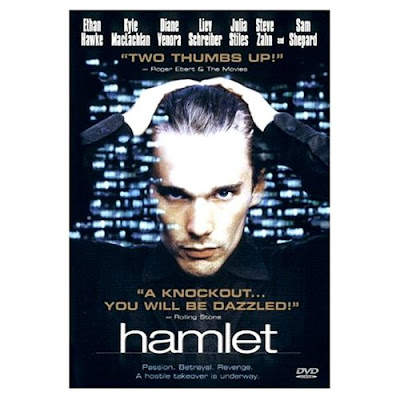 bean and i watched michael almereyda's fabulous modern version of hamlet the other night, and she loved it just as much as i do. i think we'll watch again tonight with m and boo (who saw most, but not all of it). i only wish it included the entire play, every word of it, although i suppose it would then be a three and a half hour(or more)movie. i'm kind of a sucker for shakespeare updates, or really shaking shakespeare up any old way, but i particularly like this one (not only because ayun halliday and sleeping baby inky are glimpsed during the airplane scene).

oh, wow -- my research has just uncovered the fact that michael almereyda also directed the documentary william eggleston in the real world, which is now going right to the top of my netflix queue...

we also started watching the version of hamlet starring the horrible mel gibson. i much prefer the slacker-hamlet as portrayed by ethan hawke to the googly-eyed-overacting hamlet interpretation mel gibson attempts. although glenn close is amazing as his mother.

next up: rosencrantz and guildenstern are dead. i saw this so long ago, but i remember it being hysterically funny.
Posted by Liz Woodbury at 6:04 PM

how embarrassing...I'm in the midst of an AbFab fest here in Cambridge (don't tell)

Don't forget about Titus, directed by Julie Taymor (Frida). Anthony Hopkins kills someone with a spoon!

i think of that as so violent, though i haven't seen it...is it good? aside from the spoon, i mean?

oh yeah, also i have every intention of introducing them to abfab one of these days!

Ellen and I were catching up with our TV which was busy DVRing during our long absence. We watched many episodes of The Office (USA version), 30 Rock, Veronica Mars, and some random This Old House episodes (they are working on a smaller budget duplex project right now in East Boston).

hmmm... i'm a little uncomfortable with the "goth-meat pie." and the spoon.

are you watching old veronica mars, or did they make more new episodes??

We're watching new episodes of VM. This season is just not as good as the first two seasons, but we can't stop watching.

oh no, i can't believe we missed the start of the new episodes! i think it's on tomorrow night...