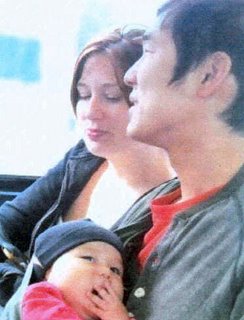 i've been thinking about the kim family nonstop, ever since i read that they were missing in oregon after a road trip from san francisco to seattle for thanksgiving. they had planned on stopping at a bed and breakfast in oregon on their way home the saturday after thanksgiving, and they never showed up. i really was pretty convinced that they'd died (they were missing for more than a week), probably in an accident on a snowy road. i had heard of the parents before -- they own a couple of very cool stores in san francisco, including doe.

today the mom and the two little girls were found, safe, where their car had gotten stuck in the snow on a rural road. thanks to the miracle of breastfeeding, she was able to keep the girls fed and hydrated for the week (they're 7 months and 4 years old). the dad left two days ago in search of help, and he hasn't been found yet.
Posted by Liz Woodbury at 10:17 PM

Ohmygoodness! I'm so relieved that they were found. I've been wathcing the news conferences today on CNET, and some pictures of the rescue and of the place where they were lost. It's so remote! I just hope that they can find James tomorrow and that he's OK.