at least they're eating well... 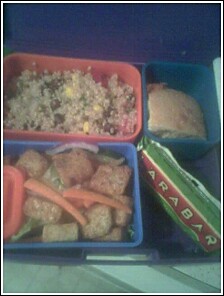 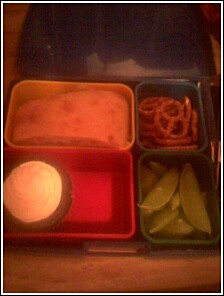 
yesterday's lunches got rave reviews, but school was a mixed bag. boo is not so sure how he likes the bus, despite the nice lady driver. he feels ambivalent about the school part, though i think he senses that being a fifth grader might have its perks (ruling the school and all).

bean had a really tough day; it was all about bonding with the crew and getting to know each other and working together on a scavenger hunt, and she just happened to end up in a crew with "bad dynamics," as her advisor said later when she called to encourage bean to "hang in there." apparently, the advisor had a pretty tough day as well. the way bean described it, there were a few really loudmouthed kids who dominated everything and were incredibly disrespectful to their crew advisor and refused to really work together at all... bean's first words upon getting into the car when i picked her up at her bus stop were "I HATE MY CREW."

the good news is that the crews are going to be shuffled somewhat, at least enough to upset the balance of power that the idiot kids in bean's crew have established... also, the fact that bean has such a great attitude about it feels like good news to me. no pluckier girl ever!
Posted by Liz Woodbury at 8:23 AM

Yikes. I hope next week is better.

me too. you can imagine the mom-stress involved in this. all i want is for my children to be perfectly happy all the time! is that so much to ask??

i will update school news, but friday was marginally better than thursday. she loves the teachers!

no, it's not too much to ask.
Even though I do know it is not good for them I would like to protect them from any level of pain or strife for their entire lives. I was explaining this to Max the other day, he thought it was funny but seems to okay with lives ups and downs.