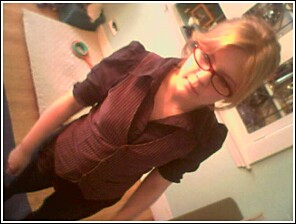 bean, looking fabulous on the first day of school. i will post a photo of boo's first day self later.

mama d and i took bean, miss gliss, and db to school this morning, dropped them off and proceeded to spy on them as they assembled in front of the building. we couldn't see much (forgot our binoculars at home), but it appeared that bean quickly located her "crew" and that the student body, lead by the amazing mr. pierce, princiPAL, boisterously "gave it up" for each freshman crew as they entered the building. and that is the end of my high school, day one, report.

as for boo, he manned his solo bus stop at precisely 8:02. his bus was due at 8:12, and he'd been instructed to be at the stop ten minutes early. by 8:25 or so, we started to fret, but the bus did eventually come (by that time, all four of us were at the bus stop, which is fortuitously right in front of our house), and it was a wee bus driven by a kindly lady bus driver, who greeted boo by name and told us she'd beep the horn if she ever arrives and he's not out there yet. boo sat in the very back seat.

further reports to follow.
Posted by Liz Woodbury at 11:34 AM

i can't WAIT to hear how the day went! she looks GORGEOUS and way cooler than i EVER was!

She looks like a flippin' first-day-of-school model from the NYT fashion pages, or better! I wish I'd taken my pics from such an interesting angle. I guess there's always first day of sophomore year....