despite earlier failures, i'm giving this baking thing another try. yesterday i made a dozen vegan brownies and six spicy ginger cupcakes with lemon icing, and this morning there were a mere 3 brownies left at the store! on the basis of that success, my manic baking project has produced: 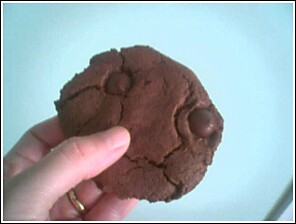 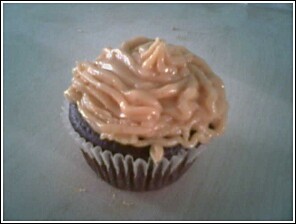 deep dark devil's food cupcakes with peanut butter icing. all items taste tested by boo and crazy girl (with the exception of the icing) and given rave reviews. raving, sugar and chocolate-influenced reviews.
Posted by Liz Woodbury at 2:07 PM

Hey, the store's still open! Might just have to mosey on down there tonight to sample a vegan delicacy....

if you ever need another taste tester, you know who to call...

hey, i might take you up on that offer! next, i'm thinking of a vanilla cupcake and some muffins. what kind of muffins do you like?

i'm so glad you liked it! maybe i'll try to bring a few more samples when we come to your house tomorrow...