a new addition to the family 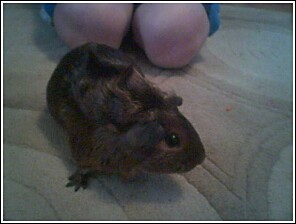 this is boo's new friend, a guinea pig named april. he adopted her today from the animal refuge league, after much deliberation and many, many visits to the small animal room (i personally fell in love with a big gray rabbit named marty, but i restrained myself). april is so pretty -- you can't really appreciate how sweet she is from these photos. she's almost an irridescent shade of tawny brown, and she's small (she's very young, so she may grow larger). she seems to like being held and petted, and happily and calmly explored boo's room without making a break for it. april and minnow have not been formally introduced yet. 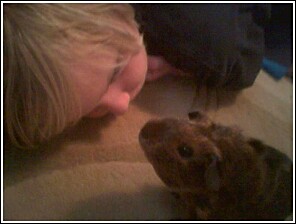 in other wednesday news, we went to the beach today with crazy girl and artemis, and had a brief, lovely time there. all the kids swam in the chilly water, despite the fact that the temperature was approximately 75 degrees (of the air, that is, not the water). after about an hour, a little charlie brown rain cloud appeared and hovered over the beach (it was sunny as soon as we left the parking area).
Posted by Liz Woodbury at 4:49 PM

at last I can see April - she's a cutie, but a big greay rabbit named Marty?!! how could he decide? I guess you're lucky you didn't end up with a menagerie!

yeah, cause bean would really like to have a donkey or two...

you forgot the friendly bohemians!! (i really hope i spelled that right or else i will be mortified)