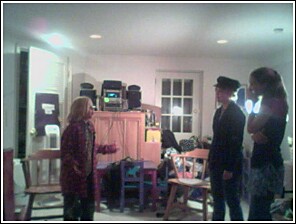 i've clearly fallen way behind in my blogging responsibilities. last weekend we stayed with old friends in baltimore (after a friday night macaroni grill feast with ellen's parents, ellen, david, and the mom and dad of miles's best friend, bert). above you can see a scene from the fabulous play written and performed by boo, bean, ava and olivia (those are pseudonyms, or more precisely, noms de plume).

the play was a mystery entitled "got murder?" boo played the role of the carnivorous football fan mr. boone. bean and ava were the bohemian vegans, jonathan and jeannette. i made the mistake of not photographing olivia, who played the pivotal role of detective diana twain, who turned out to be the murderer! 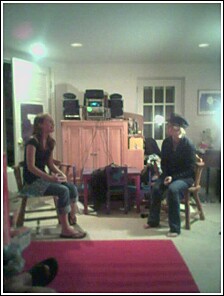 in addition to performing this fabulous play, the four of them also prepared dinner for the h's and me (we would be their respective parents, minus my m), creating their traditional restaurant complete with menus, candlelight, and mood music.

we went to the american visionary arts museum on sunday and took a brief trip to fell's point, where i snuck over to check out the daily grind, our favorite baltimore coffee spot when we lived there, and an excellent place for homicide celebrity spotting. it's changed almost completely in the last several years (even the baristas don't look the same as they always used to), but it was still fun to go there. the museum was amazing -- i want to take everyone i know back there to see it. my favorite exhibit was a room full of dolls made of brown pipe cleaners, each one dressed differently in hand sewn barbie-esque outfits, some made of fabric and others of candy wrappers and things like that. there was one polka-dotted skirt made out of a wonder bread wrapper. there were probably hundreds of them!
Posted by Liz Woodbury at 9:47 PM