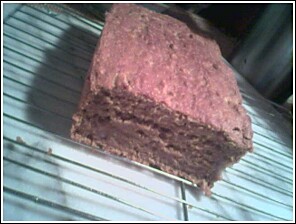 i know, i know: you come to my blog expecting to see beautiful pictures of four year old boo in angel wings (see below), and instead you're greeted with a photo of...banana bread. well, it had to happen sooner or later, and i made this banana bread that's pretty delicious despite being not only vegan, but entirely fat-free (coincidentally, it's wheat-free, too, cause i wanted to try out my spelt flour. and my version has no walnuts or dried cherries in it, although that sounds good, too). after a glorious summery long weekend, part of it spent in cambridge with mana and pop, there were three spotted, aging bananas just calling my name. one thing led to another...

i also made a cold rice-bean-veggie salad from how it all vegan, which is just basically cooked brown rice, canned kidney and black beans, and chopped red onion, red pepper, some corn, red wine vinegar, pepper, and cumin. stirred, chilled, eaten. tastes like a picnic!
Posted by Liz Woodbury at 8:11 PM