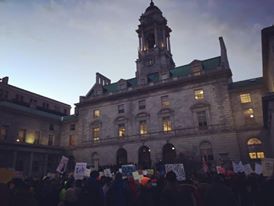 Wise words from Jamie Varon in my email inbox:

Love compels me to stand FOR factual evidence. A sentence I never thought I'd need to type and a disillusionment only 2016 could bring—that many people do not believe facts anymore? Facts are not here to suit your personal beliefs. Journalists at reputable news organizations have ethics to uphold. You've been watching too much House of Cards or Scandal if you believe the entire press is fake and incapable of reporting without bias—just because they don't agree with your assumption of the facts doesn't make the facts any less true.

To fight against injustice is not divisive. To stand for and be complicit of an unjust system IS the divisiveness. Perpetrators of racism are the dividers. Perpetrators of sexism are the agitators. If you think peace comes from being silent in the face of injustice—then your peace is dependent on the silence of the suffering. Compassion and love is not passive—and love should compel you to stand against anything which is not rooted in love. Love is not love without action.
It hardly needs to be said, any of it, and it's gratifying to be able to spend so much real and virtual time with people who totally get it -- my family, friends, my little city, even my Instagram pals and Facebook warrior buddies. But every once in a while I get a reminder* that there are many who don't get it. I want to help them, because I just can't believe that there are that many evil, mean spirited humans in this country. Or, more likely in most cases, people who are frightened of the Other.