I saw a tweet today that said something like, "Wow, you know people are mad about this Muslim ban if they'll actually go to the airport, the worst place on earth, to protest." Our little airport in Portland is the easiest one ever, in my airport experience. It takes about ten minutes to get there, five minutes to park (close, cheaply). It's quiet and laid back for an airport. Granted, I am almost always delivering someone or picking someone up when I go there--and sometimes the planes they get on or off look really really small and somewhat terrifying. 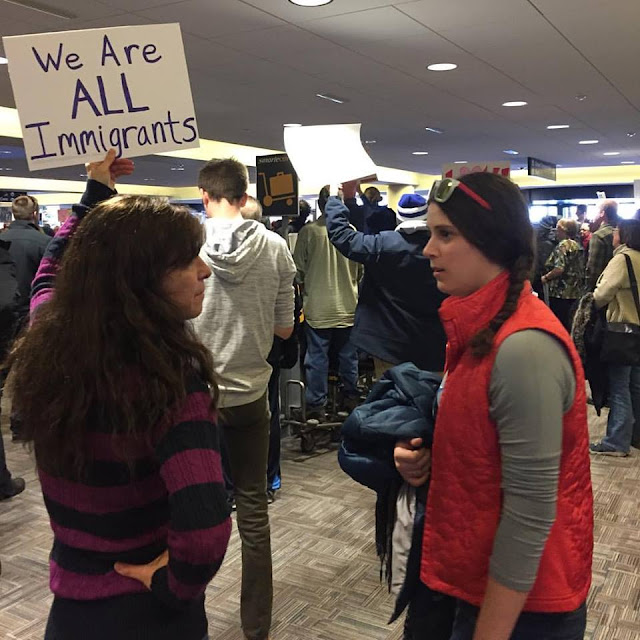 Anyway, I went to protest the Muslim Ban with the Dancer and her girl, signless (I was signless--the Dancer had one). It was truly heartening, with hundreds or thousands* of us crammed into the baggage claim area. We were early, and we watched the crowd gather--lots of families with wonderful, hastily made signs, and it wasn't even entirely white, with quite a few POC and Muslims represented. Before things got started, I noticed a guy walking slowly through the crowd, and then lurking around behind us for a while. He was white, and had a red "Make America Great Again" hat on, and a backpack. He made me nervous--he looked like the kind of person who would have a backpack full of weapons, or... I don't know, I was totally profiling him as a "type." And then, I watched two Portland police officers with a dog do the same thing. They walked toward him, walked around him, let the dog sniff around, including his backpack, which he'd put on the floor. They talked to him for a while. The end of the story is that he had no explosives (or whatever), and he was totally there to collect his luggage--just some traveling Tr*mp supporter who happened to find himself in the middle of a protest. I don't know, it was weird.


*There was an announcement that we numbered 3,600--which seems too big? Maybe?
Posted by Liz Woodbury at 4:58 PM

I believe people have a right to protest. What I have a problem with is that facts should guide the protest. This is not a Muslim ban. If it were, there would be alot more than 7 countries banned. It is not a refugee ban. It is a temporary hold so a proper vetting process can be put into place for the safety of Americans. I know people are informed through various news channels, but what I find is most of the time they word it wrong purposely to mislead the public. That is what I have a big problem with. I also don't understand the fear of Trump supporters. It was not Trump supporters that shot people in Orlando, San Bernadino or the 9/11 Trade Center etc. Please use your own common sense to figure these things out and do not follow blindly. If the blind lead the blind both will fall into the ditch. Peace.

It is a Muslim ban. It's not being put that way, but Trump did put it that way when he consulted with Rudy Giuliani about it:

“I’ll tell you the whole history of it,” Mr. Giuliani responded eagerly. “So when [Mr. Trump] first announced it, he said, ‘Muslim ban.’ He called me up. He said, ‘Put a commission together. Show me the right way to do it legally.’ ”

It is also not temporary for Syrian refugees, it's indefinite for them. They are refugees fleeing horrors in their country. The country I love provides refuge for the victims of war and persecution, it doesn't send them back.

There would be more than 7 countries banned if Trump didn't have business interests in the other countries (yes, that's speculation, but Trump is a businessman, not a statesman, and I'm sure that's his highest priority). The countries where the Orlando shooters, the San Bernadino shooters, and the 9/11 planners came from are NOT on this list of banned countries.

However, it was a Trump supporter who just killed 5 Muslims at prayer in Quebec last week.

Please use your own common sense. Do NOT follow Trump et al blindly, or you will find yourself on the wrong side of history.