My Blog About Me

I was thinking about the Dr Seuss book My Book About Me, which my brothers and I had. Every kid should have this book, because who doesn't like filling out surveys about themselves (or is that just me)? You filled in blanks about how many windows there were in your house, how many pets you had, the longest trip you'd taken, etc. 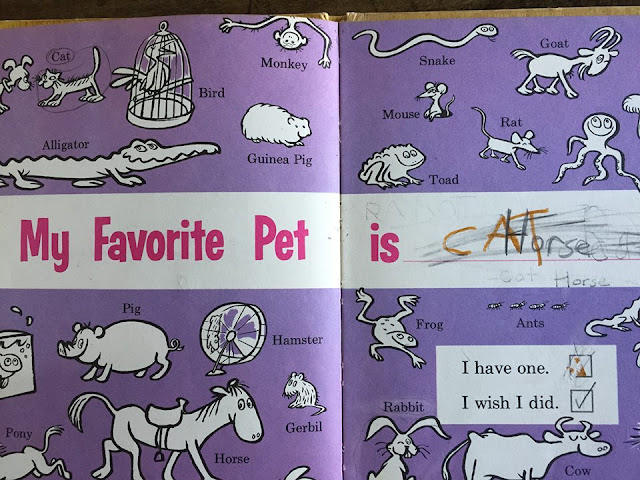 I apparently edited all of my answers several times, erasing what I'd written and updating the information, which leaves the whole book looking like it was filled out by a terribly disturbed and/or indecisive child. For "When I grow up I want to be a (blank)," I first wrote something that's now illegible, changed it to "mother," then crossed that out and wrote "millionaire." Which makes me think I jinxed myself, that there was another reality in which I was actually a millionaire.* 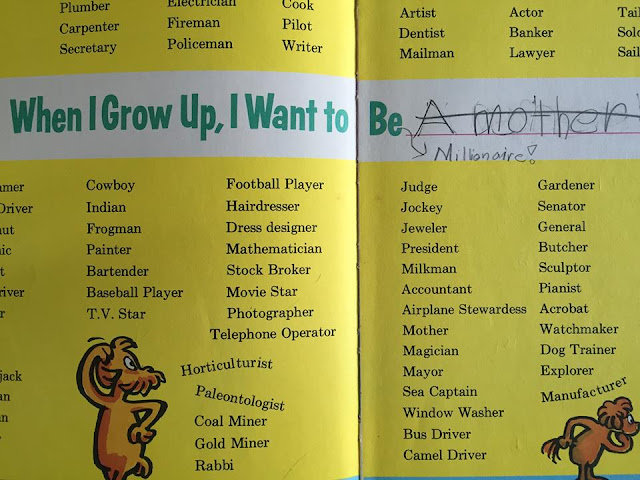 So to continue with the "About Me" theme, I'd like to say that in my eternal, deadly dull quest to ease my stomach/digestive problems, I'm quitting sugar for a couple of weeks (meaning sweeteners, white flour, processed stuff, etc). I think of myself as a pretty healthy eater (with a healthy love of treats), but clearly I had become a total sugar junkie without noticing it--as of Day 3, I have a crushing continuous headache that even wakes me up from sound sleep. It's worse than kicking caffeine, which I've also done a time or two.

And yet, I persevere! With the help of this kale and quinoa salad, which sounds so so so healthy but is actually so delicious I could eat it all day long.

Mark and I watched Wayward Pines, which was great in a poor man's Twin Peaks/Lost kind of way, with the addition of the not-very-skilled acting of Matt Dillon and some truly horrifying zombie-ish creatures.

Our Girl returns to the US on Friday night! And then she leaves for Chicago on Sunday morning! But! First we get to spend all of Saturday hugging her!


*it goes without saying that I'd rather be a mother, but hey, why not both?
Posted by Liz Woodbury at 2:46 PM

Email ThisBlogThis!Share to TwitterShare to FacebookShare to Pinterest
Labels: books, Chicago, food, mark, me me me, telervision, zoë, zombies