I live in a house with two fluffy animals, and as I have no little kids and am obligated from a wish to live a long life (and procrastination) to jump up every 45 minutes or so from actual billable work and do some other activity (which might also include making myself an iced coffee, washing breakfast dishes, cleaning something, pulling weeds, and of course futzing around on Facebook or whatever), I actually brush them both daily. Many times daily, and Mark does, too. Gus especially is just molting this summer, and Theo's coat is doing something weird where it suddenly feels matted but then you realize you can grab the chunk of "matted" hair and just pull it out all in a satisfying clump. Oh, the sweaters and sweaters I could've knitted from these two, if only I knitted and would ever do such a thing.

So when it's really hot it's nice because cat and dog hair just kind of floats around in the air and sticks to your sweaty face and body.

I have vacuumed up bags and bags of my boys so far this summer. I am so glad that Zoë, girl of All the Allergies, isn't here right at this very moment to be breathing in hair and dander.*

Gus: molting, and also defending his territory, which extends as far as his eye can see. His other Pyrenees thing is an underlying firmness in sticking to his own decisions about what to do, regardless of what some person might be instructing him to do (or not do). He's just so cheerful about it, it's honestly hard to get mad. The other day, Mark called him to come out of the water at 8:55, five minutes before the beach becomes Humans Only. Gus decided, "Nope." Instead, he waded, up to his armpits in the ocean, back and forth, pretending not to hear his name, gazing sideways at Mark from time to time, for an additional ten minutes. Hey, it was hot out!

Other funny Gus thing: if I say to him, "Where's the Master?" he goes looking for or running to Mark, all excited. If I say, "Is that your Master?" Gus gazes lovingly at Mark. Mark kind of hates the "Master" thing, but I'm just continuing a family tradition starting with this cartoon. I speculate that Gus thinks of me as "that nice lady who lives with Master and me." 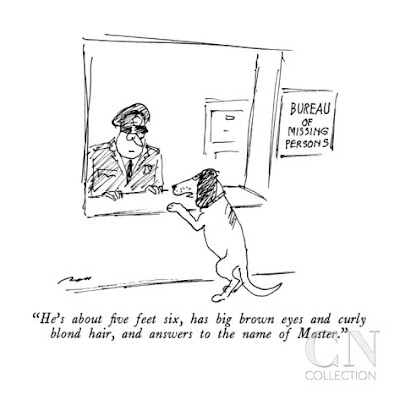 I hereby give you permission to cheer yourself up, on occasion, with whatever form of ice cream makes you happy, by the way.

*She is in Switzerland this weekend, presenting at a conference, matter of fact. Back to Mysore on Sunday!
Posted by Liz Woodbury at 2:37 PM