We Shall Sit On the Floor

I dreamed that too many things were going on at the same time, planned casually by other people. I was trying to face a complicated day with equanimity, calmly, but feeling the panic of having to be in several places at essentially the same time--meeting a train, racing to the airport where old friends would be arriving shortly, coordinating everything within the confines of transporting people in our tiny car.

The friends at the airport arrived, and when I reached to hug one of them, he said, "No, not that side," and I realized he'd been injured in some way on the right side of his body. Both of them, I saw suddenly, had been burned terribly. They seemed dulled, quiet. Something horrible had happened. I drove them to a hospital, where my mom cared for them in some way--a blood transfusion? I did take a dream moment to wonder, "Why did they get on a plane and come for a visit?"

Day after day, in my real life, I have been staying up too late reading and waking too late to take Gus to the beach with Mark. I need to shift back to a reasonable schedule, because I feel the space where that morning beach time should be.

In other news, we weathered this holiday season with a total of five broken chairs. Five. 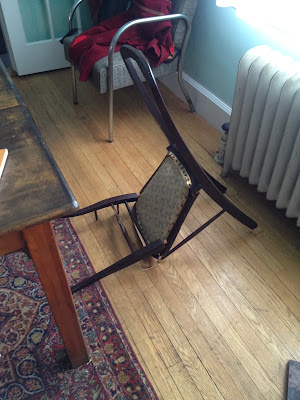 Here's hoping this isn't some kind of omen, or evidence of a chair-destroying poltergeist. Seriously, five chairs?! This is the ugly reality behind my pretty pictures of charming antique-type furniture: these chairs are old and fragile. My dream for 2014 at this point is NEW CHAIRS.
Posted by Liz Woodbury at 9:48 AM