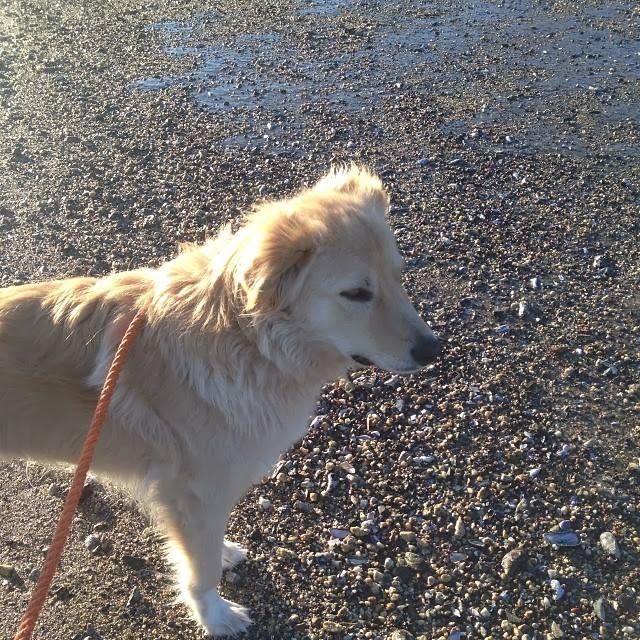 He waited for friends on the beach this morning, but it was just so cold. First there were some dogs that are a little standoffish (to them, he's just a pup, and they growl a warning when they see him galumphing toward them). Then he was overjoyed to see a real puppy he's met before, but she was just leaving and he only had a chance to tumble and roll her across the sand for about five minutes. Also, her owner said, "Oh, Gus. We know Gus. He likes to hump her."

Did I mention how cold it was? Better twenty minutes of beach than no beach at all, I say.

Did I mention that I'm on a doctor-prescribed diet in an attempt to cure my irritable innards? No, I'm sure I didn't because that is the most boring subject ever in the whole history of the world. I am trying to look at it all glass-half-full, but I can't help but note that many of the things I can't eat right now are the things that sustain me, normally: garlic, onions, beans, soy, wheat, honey, apples, broccoli, Brussels sprouts, cabbage, cauliflower, mushrooms... Yep, pretty bad. I only mention it because I had a funny dream that involved the Wii game Just Dance, some characters from American Horror Story: COVEN, and me devouring a falafel sandwich like an animal. I mean, just shoving it in my mouth, gobbling it so fast that by the time, in my dream, that I realized I was eating at least two forbidden foods (wheat, chickpeas), it was far too late.
Posted by Liz Woodbury at 3:15 PM

Wow! Char had told me you had to go on a restricted diet, but that's REALLY severe! We'll have to discuss if we ever manage to make it out for tea...Char's car is frozen shut these days, so she has been having to take the van to The Shack.

I know, it's a little crazy! And I keep getting sidetracked by facts like "I can eat potato chips." How about we go for tea as soon as Charlotte can drive the other car? Or, alternately, next week!