All Form and No Information 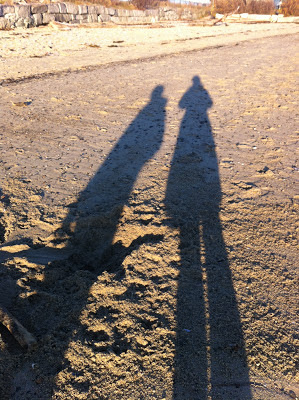 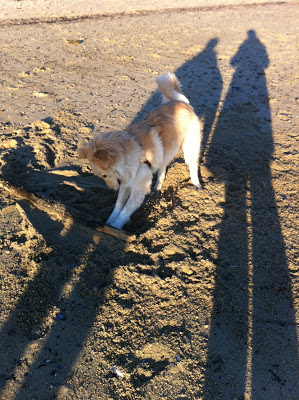 Oh these mornings at the beach! Our boy is such a dream that a morning trip to cavort with some friends, splash in the ocean, dig some holes, is all he needs to manage that puppy energy for pretty much the whole day. On Thanksgiving he got two beach romps and a huge bully stick chew for good measure. Thanksgiving was delicious; I made a ridiculous amount of food, we ate lots of it, friends joined us, the dictionary game ensued. Delicious.

Still, it's funny. I had fantasies of old-school Thanksgiving, which we always used to spend eating take-out Indian food, walking deserted city streets, having midnight adventures. We'll see what happens in 2013.

Meanwhile, this happy, gentle holiday weekend, with our girl home and lighthouses all lit up and the sunshine shining and cups of coffee and secret Christmas music, lap cats and leftover pie for breakfast. 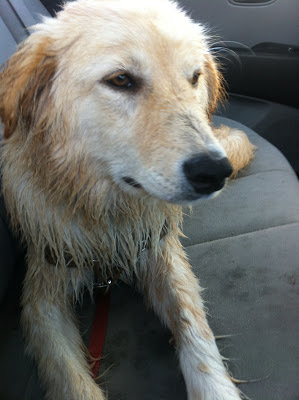 More Gus (in this case, damp and salty from the beach, as usual), because I am switching to a terrible Gus-related topic: the rescue group from which we got him was shut down for being unclean and overcrowded. I've read all I can find on the subject and exchanged emails with other people who have adopted from them, and it's still not clear to me exactly what happened. It appears that either 1) they were running a bare bones "rescue" for profit, providing little care to the dogs, or 2) they had good intentions but took on too much, too many dogs. It's not the most dreadful situation you can imagine--it doesn't look like there was any abuse, for example, just a dirty-ish facility and dubious medical treatment at the worst. But it leaves a terrible taste in my mouth. In general, the lesson is: carefully research dog rescues. However, I don't regret anything about our experience, because I don't for a second regret ending up with Gus.

And as far as Gus goes, he arrived smelling fine, with no fleas, no kennel cough, and neutered. He did have two kinds of worms and was ravenous and very skinny. The people driving the van had kind faces. The other dogs also looked clean and fairly healthy. I'm just feeling relieved to have picked up our boy before they shut the place down and seized the dogs, and happy to have gotten him out of there. And I must admit, it makes me less inclined to crate train him--I hate the idea of putting him in a crate, knowing he probably lived in one for a month (at least). He is a good boy.
Posted by Liz Woodbury at 9:04 AM

Wow! So glad you got Gus in time.