We lost our sweet boy Minnow on Thursday. He was here, alive, and then he was suddenly very sick, and we had to let him go too too soon. 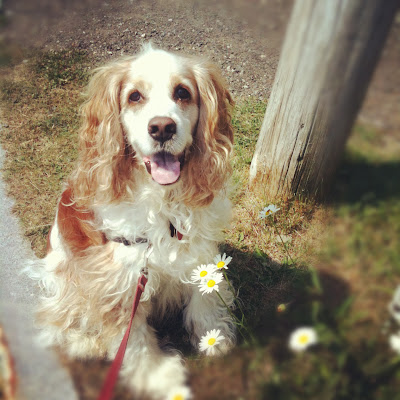 Oh, how I miss him. I can be a rational person whose dog has died one minute, throwing away dog vitamins and his little toothbrush, and some of the many, many tennis balls we had somehow accumulated. I can calmly think, "The harness leash goes, I'll keep his collar." But the next minute, I am sitting on the stairs sobbing because I miss the feel of his back under my hand as I walk down them. He was always there, always. I miss his terrible breath and his too many kisses and the way he wagged his tail when he walked, always. I miss the funny little bump on top of his head, his muppet paws, his snore, the sound of his toenails coming down the hall, his habit of gently carrying his stuffed animals in his mouth or resting his chin on them, his Spaniel cry when you'd just barely step on his foot. I can feel him, I just know that he's under the bed or behind the pellet stove. I come in the door and my heart falls because he's not there. His ears, his silky red ears: the last bit of him I touched, the last part of him I saw as we walked away, leaving his body on a shady patio under a blanket.

The night before the day we said goodbye to our sweet friend, the day we let him go, was the first night in months that my feet, in bed, longed for warm socks. The breeze in our window felt like October. He was restless, breathing rapidly, uncomfortable. He had taken to sleeping under the bed lately, but that night he came up on the bed around three AM, and I lay with my head down, my hand on his side, for the rest of the sleepless night.

The day itself, the three of us lay on our kitchen floor with him. He was wrapped in a blanket, resting, restless, not quite sleeping, and we cried and talked to him and petted him for hours and hours. 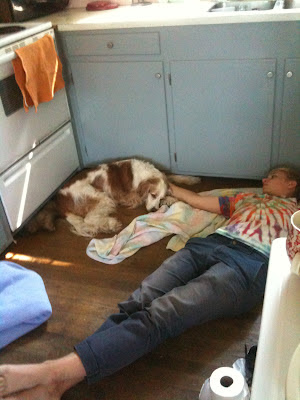 I'd like you to know that his death was as gentle and easy as it possibly could have been, that Mark and I were with him, and our favorite vet, and that we were outside on a beautiful sun-dappled afternoon, and that we talked to him and petted him and he wasn't afraid.

He's everywhere in this house. He's behind the couch, he's just in the other room. He's in the yard, he's in the car. He's on the beach, in the woods, walking around the neighborhood.

I don't let myself regret much, and I don't regret much about Minnow. He had a very happy life that wasn't quite long enough. But as my aunt Sooze said of dogs, "They live until they die." And he did, he was utterly alive up until his last two or three days. If I regret anything, it's the sunny mornings I didn't take him to the beach, the car trips I didn't invite him along for. Just a few. Maybe I wish I'd cooked him gourmet meals, because he deserved them. But may I say that I did occasionally spread a dollop of peanut butter on his dog treat? Let him lick the cat food spoon? Gave him a hunk of fresh mozzarella just because?

I'm grateful to have so many people in my life who get it, who really understand how hard this is. Every time I get on the interwebs, there are lovely heartfelt expressions of love and sorrow, and they make me bawl all over again, and somehow they also help so much. My friend Mama D is the one who drove Minnow and me around to various vets, the first person I said the words to, the first person who cried with me. Our dear David Meiklejohn was here just before we took Minnow to the vet for the last time, petted his tired head, cried with us, hugged us. Thank you, friends, all of you.
Posted by Liz Woodbury at 1:12 PM

I've been waiting for this and I cry, just as I knew I would. I'll add that the place to NOT go on the third (?) day after Minnow's death is the pet store, to buy little crinkly ball toys for the "trying so hard to be a dog" cat. What was I thinking?!

Oh no, did you have to cry in PetCo?! I didn't think it through either when you said you were going there...

This brought me to tears.

Sometimes I think that the secret reason that I do not have a dog, the reason that I don't mention when I say things about apartment living, real estate, and travel, is that I am still getting over the dog that I lost ten years ago.

Jason, when we were saying goodbye to our friend, Mark was saying, "Why? Why do we do this to ourselves, and how can we ever do it again?" It is so, so hard.

He was a good dog and so clearly, beautifully beloved. May the ratio of heartache to sweet memories shift to a more comfortable spot as soon as possible, my friend. Godspead, Minnow.

I, too, am brought to tears by this entry. Thank you for sharing your story. I am so glad you were able to spend the time that you did with Minnow as he was dying, and that his death was peaceful and surrounded by love. Our companions love us and teach us so much, and it hurts so much when they leave us. Three weeks have passed since Kieran unexpectedly died, and the heartache is still very raw. Be gentle with yourselves, and cry as much as you need to. xo

Oh, that picture with Isaac and Minnow on the kitchen floor did it to me. Sob.

The thing I loved about Minnow was that he had the eyes of a wise old grandfather or maybe even, if you'll excuse me, a grandmother. It was like you could tell him your deepest secrets and he'd just pat your back and say, "I know, honey, I know. Do you want a cookie?"

So heartbreaking. It is impossibility hard to say goodbye to pups.

Oh, Liz. I'm so very sorry. This is such a big and constant loss. Your words are just right, thank you for sharing them. How lucky you and Mark and Zoe and Isaac were to have him. Hugs to all of you.

OK I read it Liz. It made me feel a mighty guilt spreading over my face for getting so tired of our Blueberry peeing when she greets someone at the door.

I had a dog named Sadie who I got as a small child and died when I was 23 (she was 20). It was one of the toughest things my Mom has ever done letting her go. But it also spoke to how loved Sadie was when she was here.