Late night emergency room adventures with my boy. Here's what happened: he and some friends had a fire in the backyard and cooked dinner over it. Veggie burgers for Isaac, and a carnivorous friend cooked bacon in a pan. At some point, Isaac moved the pan of hot (hot, really hot) bacon grease, splashing some on his left hand. He got it under cold water immediately, and at first I didn't think it was too bad a burn because it didn't blister (a la my arm in the hot tea adventure of '07 or whenever it was). After about an hour and a half, though, it was so painful that he allowed me to take him to the emergency room. 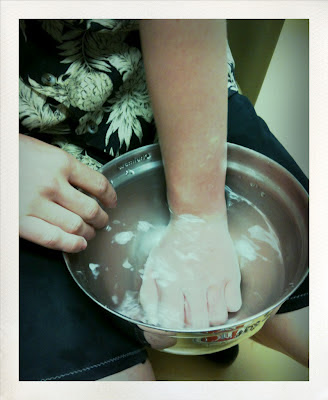 He brought along his bowl of water. I joked that it was his comfort object he never goes anywhere without. He could call it "Bowlie" or something. He explained himself at least five times, as we were taken from room to room, Isaac and Bowlie and me. "Are you safe at home?" asked the intake nurse, not even looking at him. I could've been glaring cruelly at him for all she knew. Everyone remarked that he smelled like a campfire, and the P.A. who eventually treated him said, "You smell a lot better than most of my patients!" A passing nurse jerked his thumb over his shoulder toward an exam room and said, "I wish a meteor would hit that guy!" Our P.A. looked like he hadn't had a good night's sleep in weeks, and our nurse looked like she was about thirteen years old, and she kept wandering off, claiming she would come right back with Isaac's pain medication and then not reappearing for forty-five minutes (without the pain medication). The place didn't appear to be very busy, but at one point the P.A. and the nurse commiserated about "So many IVs!" So. 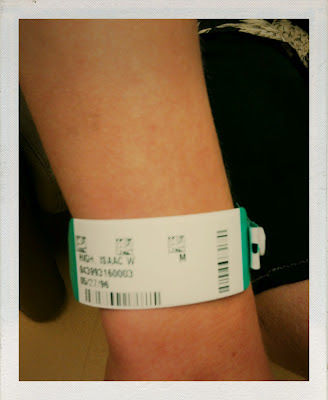 It was really not a terrible experience, just bizarre. Well, it was terrible for Isaac because once they took Bowlie away from him and dressed his burn (second degree, finally blistering a little bit), he was in extreme pain. He was shaking with pain. He took his Oxycodone when they finally brought it, and we drove around for half an hour while he waited for it to kick in, hanging his bandaged paw out the window of the car while I looped around the Back Cove, up and down Congress Street, along salty-smelling Commercial Street. I woke him up at 3 AM to give him another pill, and miraculously, he feels so much better today.

Things I thought of last night:

1. As the P.A. wrapped gauze around his hand, I remembered the Halloween when Isaac was a mummy, and I followed him down the street with a roll of packing tape, taping him up as he unraveled.
2. When he was about nine months old, Isaac got his hand vacuumed in the vacuum cleaner. His soft little baby hand, all scraped and raw.
3. Over the past month, I've had to see both of my children in extreme pain and I don't like it one bit.
4. Isaac's drugs were much better than the ones Zoë got post-wisdom tooth extraction.
5. Driving around Portland with an exhausted, pale-with-pain boy reminded me of that brief time we spent driving sleeping children in cars, lulling them to sleep. Carrying them inside, hoping they'd stay asleep. Their eyelashes.
Posted by Liz Woodbury at 10:03 AM

Oh dear! I thought I heard Isaac on Blunt last night, buy maybe not....Mercy or MMC? Those hospital folk sound incredibly insensitive, but at least they gave him powerful pain meds...next time, stop by chez Mama D on your way to the hospital for a dose of post-hip replacement meds to take the edge off!

mmc. they were fine, just a little...off. and yes, i was grateful for the pain meds so he could sleep (despite the fact that he kept rating his pain somewhere between 6 and 8, stoically--it was actually a 10 as far as his experience of pain). i will remember the good stuff's at your house!

Your Poor boy! Maia once got second degree burns from someone's FAUCET WATER (with no temp control) she whimpered all night...no oxycodone for her....so glad he's on the mend...