all goes onward and outward

isaac had a feeling that april wasn't well yesterday--it's a little eerie, actually, since many days often go by without him thinking about her at all (i have been the main guinea pig wrangler in this house for a few years now). but yesterday he spent a lot of time petting her and talking to her, and he told me he was pretty sure she'd gone blind. her eyes have had that cataract-y look for some time. she was still shiny and lovely, but when you petted her, you could feel her bony little shoulder blades (or, wait, do guinea pigs have shoulder blades?).

we went out last night to isaac's parent-teacher conference at the shack, and when we came home he found that she was unconscious, breathing so shallowly that he was sure she had already died. we made her a little blanket and stroked her head and said some things to her. she was gone, or very very nearly so, when we went to bed last night.

isaac had just turned ten when he brought april home, and for a time he adored her, and even when he lost interest in small animals kept in cages (it's a complicated relationship when you feel like your pet is a prisoner who lives in a poop-filled house), he loved that little animal. we all did.

she is (maybe) survived by two children (which probably means hundreds of grandchildren and great-grandchildren), and her friend and admirer, minnow. 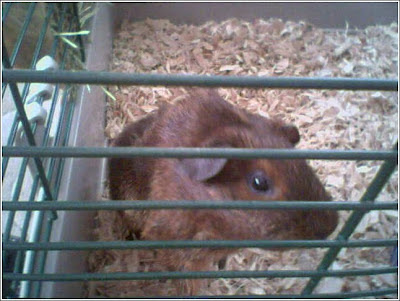 "The smallest sprout shows there is really no death,
And if ever there was it led forward life, and does not wait
at the end to arrest it,
And ceas'd the moment life appear'd.

All goes onward and outward, nothing collapses,
And to die is different from what any one supposed, and
luckier."

from Song of Myself, by Walt Whitman
Posted by Liz Woodbury at 8:21 AM

I have never seen April, just heard her squeals when I went upstairs to the bathroom. This still made me sad.

oh jason! i'm so sorry you never got to meet her. she was a lovely guinea pig.