'hodgepodge' is a good word

my-can't-look-away fascination right now is hoarders, featuring stories of people whose entire houses look even worse than my basement. i got mom hooked on it too when i visited last week. which reminds me of this.

as i stubbornly await the reopening of the kind of brand new library on april fifteenth, i have been catching up on my mountain of new yorkers (but i'm not a hoarder -- i recycle them when i'm done), and reading random books i find on our shelves (currently a collection of short stories by f. scott fitzgerald).

hey, did i ever mention that boo scored a ticket to see president obama when he came to town last week? what happened was, boo was pretty mad at me because i wouldn't let him stand in line (in the rain. instead of going to school. for hours) to possibly get one of the free tickets being given away. in fact, he was basically furious about it, and i actually felt quite regretful that i hadn't let him do it. i didn't stand in line myself because obama and i were going to be like two ships passing in the night, me on my concord trailways boston-bound bus, him in his motorcade. after i left for boston, m came to the rescue, scouring twitter until he found a guy who actually had an extra ticket to give away. "best story gets it!" the guy said. and, as it turned out, boo had the best story. several hundred people with tickets did not get in - tragically, including the man who gave boo his ticket - but boo himself managed to sneak forward in line where he spotted a friend from school, and he made it in! 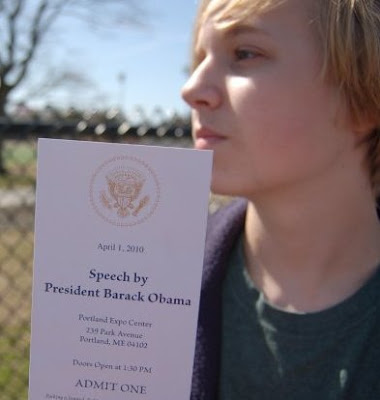 because i trust you implicitly, erin, i have just added those to my library list. just for fun.