it is SO not fair 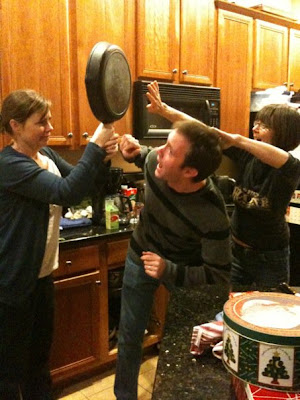 they have such funny news items in cambridge, and there's really no equivalent here (at least not that i've come across -- like a good old fashioned police blotter compiled and edited by someone with a great sense of humor). my mom sends me things from wicked local cambridge all the time, and they're often laugh-out-loud funny. case in point:

A man who attacked a woman with a frying pan in his Cambridge home was arrested on Jan. 21, according to a police report. The 62-year-old Cambridge victim told police the suspect allegedly came towards her threateningly, a raised frying pan in his hand, causing her to “duck and back away.” She said she believed he was going to strike her with the pan and called police. The defendant told police he was cooking soup in the kitchen when the victim came in “like a hungry vulture.” All she does is “talk, talk, talk,” he added. He said they argued and she called him names so he lost his cool. He denied going after her with a frying pan. He also reportedly complained “she has time for everything in the world but me.” Swarn J. Singh, 70, of Cambridge was charged with assault with a dangerous weapon. The pan was tagged as evidence.


***note: the above photograph is for illustrative purposes only. it was a fake altercation staged by me, my bruddie, and my mom in the kitchen at christmastime. our acting out of such scenes staved off any actual misbehavior for the entire visit.
Posted by Liz Woodbury at 5:04 AM

For a little while, I lived in Watkinsville, Georgia, and the blotter there was like this one. One day, I read an item about a man hitting a woman with a "pickle jar full of nails," and I have kept that phrase in my mind forever. Not nice, of course, but still hilarious.

oh, that is a beautiful phrase. i like it even more than "the pan was tagged as evidence."