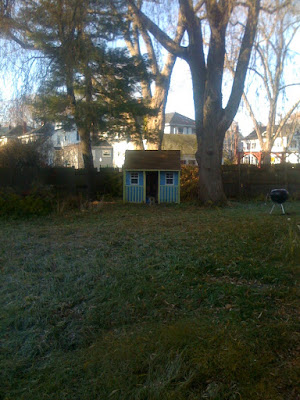 i know you're like, "shut up about the chickens already!" but wouldn't our playhouse make an adorable chicken coop? i think it could be retrofitted fairly easily.

we bought the playhouse when we first moved here in 1999, and the house numbers on the side represent the ages of boo and bean at the time (3 and 6, if you can believe that), and also happened to be our street address in baltimore, where we lived before moving to portland. this thing cost just about one thousand dollars, which was the exact amount of cash we were left over with after we sold our baltimore house and bought our portland house. ever practical, we spent it on this playhouse, which has seen some action over the last ten years, although not as much as we imagined at the time. i think it needs some chickens. 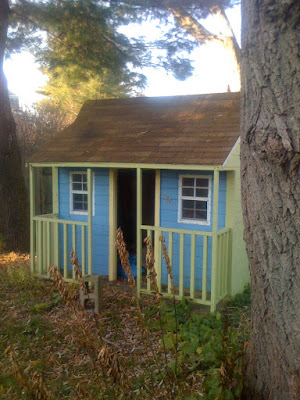 Yes, two chickens: one named Three and one named Six.

I think we are definitely going to get some chickens at some point. Esp. if we can get the ones that have furry legs and look like they're wearing pants (wait, suddenly thinking that I'VE said this here before...and now I'm an additional crazy chicken lady).

julie, we can be crazy chicken ladies together. i love those furry-legged chickens too!