i made some kombucha. if you google that word, and click on "images," i can guarantee you'll be horrified. so don't do it. it involves a mushroom-like starter, and fermentation of a sugary tea. the result is a delightfully fizzy, sour carbonated beverage that is vaguely reminiscent of vinegar but in a good way.* on sunday, we invited some brave friends over for a tasting. 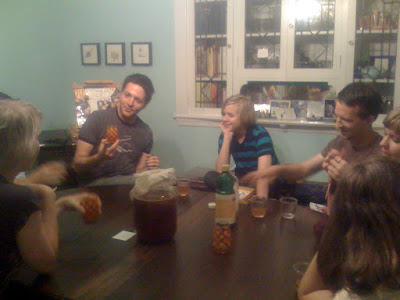 i think there were some words like "oaky" being used here. 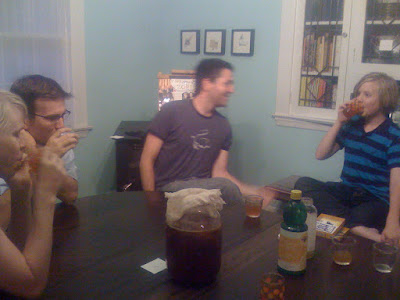 that big jar in the middle of the table is batch number two, and it was there for illustrative purposes only (also to test the mettle of my tasters, as the contents aren't exactly pretty). the verdict was: yummy. not fizzy enough. someone thought a bit too sweet (hence that bottle of lemon juice). and finally, we all survived. i'm going for more carbonation in batch number two.

*i just know someone is thinking, "why?" right about now. well, i'll tell you. kombucha has all kinds of purported health benefits similar to other fermented foods, including those good bacteria that your stomach likes (someone also told me that it can reverse graying hair, which i'm not so sure i believe, but i'll let you know). ever since i first tasted it, when my initial thought was, "weird." i've craved it. and the good kind you can buy at whole foods is really expensive. my friend amanda carried a "mother" (that's what we in the know call the kombucha starter) in a plastic bag on her lap on the bus all the way from new york, just for me. also, it's kind of like homebrewing for non-drinkers, right?
Posted by Liz Woodbury at 10:17 AM

Hmmm...I tried that "good" kind from Whole Foods, and I was unconvinced, to put it mildly. I'd try yours, though!

Yay for fermented foods. Not that I usually eat any, but I'll pretend I do to support you.

Glad that I could be part of the test group. I still haven't tried the store bought stuff, but nothing will compare to the excitement of knowing that the bottles could EXPLODE at any minute. Whole Foods can't match that.

I love the story about "The Mother" being smuggled on the bus. There is a real story there, set in the non-too-distant future when fermented and homebrewed beverages have been outlawed by the Monsanto Corporation.

melissa, you should try the mango flavor. it's a great "gateway" kombucha.

erin, your tummy would love you if you ate fermented foods!!

jason, i think you're exactly right. i can also see it being turned into an excellent science fiction/horror movie.