what's it like to have her back, you ask? well, it's been pretty fabulous nearly every single minute, to tell you the truth. it was almost worth being without her so long to have the chance to be reunited with her, to get to hug her constantly, to walk down the street holding her hand, to see her in the morning and be delighted and surprised all over again that she's home!

she is adjusting admirably well to being back, especially considering the emotional and physical difficulties involved in re-adjusting after an entire year away. she misses it, she misses people, she misses speaking german all the time. she has shed a few tears, exchanged some emails with german friends and family, and spoken on the phone to her german host mother. she has many wonderful and funny stories to tell, and lots of souvenirs, photos, books, and recipes to share. her friends seem truly overjoyed to have her back, and are enthusiastic listeners. she seems like herself (of course, right? but we wondered about this). just a few notes on the culinary changes in a sixteen year old mädchen fresh off the plane from germany:

**she likes a dark, dense, seeded bread that we haven't yet located here in portland
**she likes radishes
**she likes emmenthal cheese
**she instinctively expects a larger meal at lunch and a smaller one at dinner
**she likes her water carbonated
**she craves a small cup of coffee in the afternoon


she tells fabulous tales of the most wonderful piece of kitchen equipment you've ever heard of: the thermomix (pronounced "TER-moe-mix"). it apparently does everything a blender, food processor, grinder, steamer, mixer, kitchen scale, timer, etc. can do, all in one amazing package. i. want. one.

she made a schwarzwälder kirschtorte (black forest cake, which we attempted before she left, you might recall, although not quite authentically, according to the mädchen) for a party at a friend's house tonight: 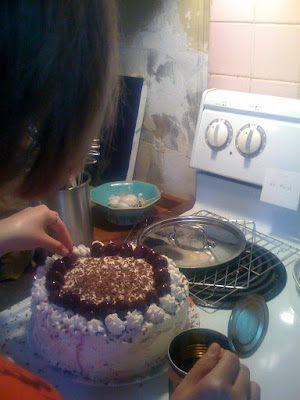 it requires kirsch, which we don't happen to stock in our (nonexistent) liquor cabinet (our liquor cabinet is a refrigerator full of kombucha, actually). 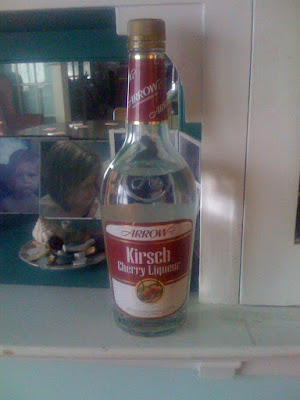 bean and i had a hard time tracking it down (in the liquor aisle at hannaford, a young man gestured at the various bottles of jägermeister and asked me, "which one is a fifth?" i could only shrug helplessly. no idea, buddy), but finally mama d came to the rescue. it turned out her neighbors had a bottle - from the last time they made a black forest cake, in fact!
Posted by Liz Woodbury at 6:04 PM