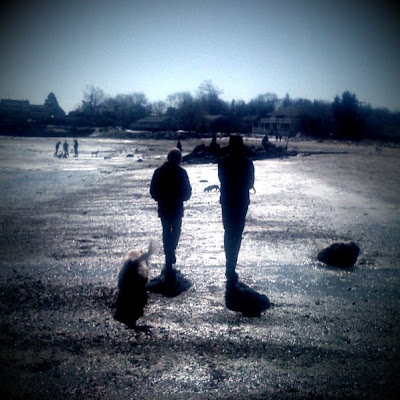 yep, it was back to the beach for us today. it was almost fifty degrees, which meant a throng of people and deliriously happy dogs on willard beach, and it also meant nearly naked sunbathers here and there, as people clearly desperate for vitamin d soaked up the sun. there's been a huge dog-related controversy brewing at willard beach for quite a while (basically pro- and anti- dogs on the beach). i am firmly in the pro-dog camp (no, really, liz? you are?), so i'm clearly biased, but i have to say that despite the fact that there were probably thirty or more dogs on the beach during the hour we spent there today, i didn't see one single pile of dog poop left unscooped, and i didn't witness any remotely bad dog behavior. there were nearly as many extremely short children (like, under the age of four) as there were dogs, and i saw not one of them get knocked to the sand by an exuberant canine. so there.

i would like one more day of this weekend, please. one more sunny, lazy, sunday-type day. in retrospect, last week was long and stressful. i'm not quite ready for the next one. i would like to lie nearly naked on a beach eating cupcakes instead of resuming the week's routines and money stress and job hunting...
Posted by Liz Woodbury at 3:28 PM

Come on, it is always the same this time of a year. Weather is bad, monthly expenses are the highest of the year, job hunting or winning of projects have to be done for the rest of the year.
I trust in you, you will get it done! Keep on going.
Andreas

thank you, andreas, i know you're right!!