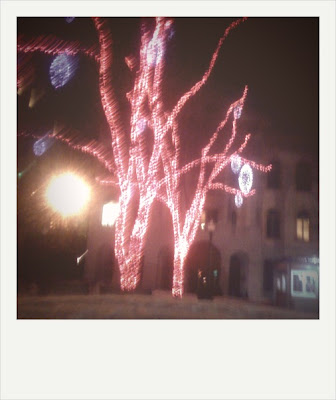 (above: hello old port, old friend! we hardly ever see each other any more...)

i took myself out on a date tonight to see revolutionary road. i was truly prepared to be moved by its basic theme, the poignancy of finding yourself stuck in suburbia, adulthood, a conventional way of life -- not what you might have imagined your life to be. it may not be universal, but it's a good, solid, verging-on-tragic idea to center a movie around. also, pitch-perfect illustrations of marital love can be utterly sweet and true (an example that comes to mind is away from her). something was so wooden and awkward, though; probably the writing, and very possibly leonardo dicaprio's acting. maybe the directing? plus, this is one of those movies where the couple's two children are mostly conveniently absent, unless they're running through a sprinkler in the backround. that drives me crazy. i can hardly say a word against kate winslet, who manages to do quite a lot with the roles she's given, even in crappy films like titanic. plus she's completely interesting to look at. even the period details (of the 1950's), costumes, set design, all left me wishing i were watching an episode of mad men.

so: leonardo in a hat, in grand central station. kate winslet's pretty mouth. one certifiably insane character who seemed arranged just to shake things up or lurch the plot along. kathy bates, who i love. as did the older gentleman sitting behind me, which was evident in this conversation he had with his companion during the closing credits:

oh good, i can leave that one on my list of movies not to see...