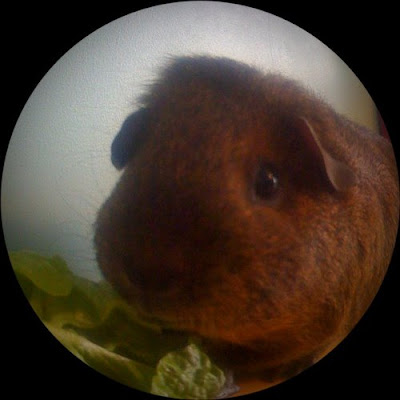 she's the closest thing we have to a groundhog, at least inside the house (although i haven't spotted our groundhog friend who lives under the playhouse since the weather was quite a bit balmier). i learned today via the writer's almanac that groundhog day was invented by germans -- german-americans in pennsylvania, to be precise. it's a spin-off of various pagan and religious holidays which all essentially celebrate the halfway point between the winter solstice and the spring equinox. that's pretty hopeful...unless you're in a glass-half-empty frame of mind, i suppose.

punxsutawney phil did see his shadow, as it seems he always does. it seems a little ridiculous, actually, to imagine that there wouldn't be six more weeks of winter at this point. right?!
Posted by Liz Woodbury at 11:31 AM

what would i ever do without you??

yeah, without me who'd take adorable photos of the guinea pig???!