mysteries of my house 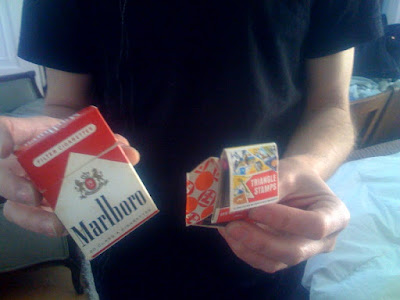 m just found this pack of cigarettes and matches hidden in the basement ceiling -- further evidence that a bad teenager (circa 1978) once lived in this house. other interesting finds: dozens of champagne corks in the back yard, and a "crime journal," also hidden in the basement, with these notes: "ray said that the police had an eye witness that he said he was wearing a purple jacket and he said that was bullshit because he said he wasn't wearing it when he pulled off the job. 3/23/84."
Posted by Liz Woodbury at 8:43 AM

Email ThisBlogThis!Share to TwitterShare to FacebookShare to Pinterest
Labels: house

ooo, I love these - especially the crime journal !!