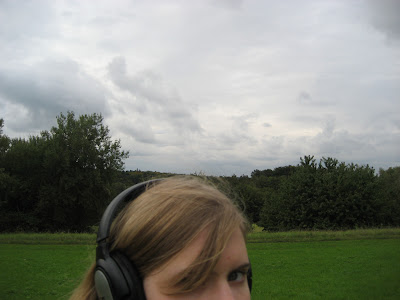 i stole this photo from her, but i couldn't resist -- here is her head (and her headphones) in germany! i didn't realize until i saw her new photos today on her flickr page how strange it had been to not see her for three weeks. now we have evidence she's alive and whole and still looks like our bean.

i think it'll be equally startling to actually hear her voice, when we do finally talk on the phone or via skype. "chatting" online with her has so far been the easiest way to communicate weekly, so that's what we've been doing.

back at the ranch, here's what i've been up to:

reading
*gluten-free girl from the liberry

watching:
*encounters at the end of the world (directed by werner herzog, about scientists who work in antarctica);
*the first three episodes of the wire season one (finally!);
*firefly (still);
*christiane f. (also known as wir kinder vom bahnhof zoo -- the true story of a fourteen year old heroin addict in berlin in the late seventies. ohh, so tough to watch, i don't recommend it to most readers of this blog, except a couple, and you probably know who you are)

eating
*all the aforementioned comfort foods, and more: homemade apple turnovers; quiche; chocolate chip banana bread...finally, tonight i made a big pot of miso soup with only healthy stuff in it. and hijiki salad, too.
Posted by Liz Woodbury at 8:09 PM