final night of the convention 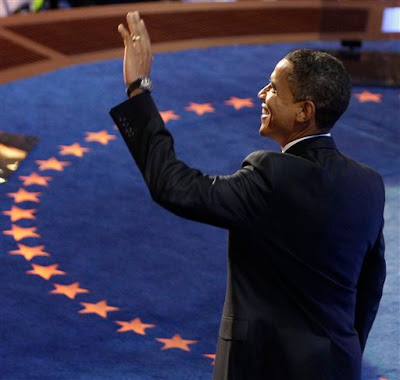 
i would've liveblogged it if i had me a laptop (i can't actually write in my blog on MYphone, strangely enough. i can't explain why, i'd have to show you). i had all kinds of brilliant thoughts along the way which i've now totally forgotten in the wake of obama's speech.

the only thing i remember is thinking "sheryl crow kind of looks like felicity huffman."

i loved it. the man is articulate, eloquent, a real live human being, and i swear to god he means what he says. i could more than stand to listen to him for at least four years (i can't bear the sound of our current president's voice; it makes me physically ill to listen to him speak). we were watching on pbs, and afterward that cranky, sour-faced curmudgeon david brooks said the speech was "too long." which was funny, because just a few minutes before that, m had commented that he would have been happy to listen to obama talk for a lot longer!

oh, yeah -- i also loved hearing al gore's speech, although he seemed to be speaking really rapidly. and david brooks's reaction was also bizarre and bitter, essentially saying too bad gore wasn't honest and impassioned when he was actually running for president, then maybe he would've won. and mark shields quickly reminded him that gore did get 500,00 more votes than the man who became president!
Posted by Liz Woodbury at 12:08 PM

i know - i though al gore's speech was one of the best of the convention and john and i were both surprised that it didn't get a better reception from the blow-hards on pbs that night.

i couldn't stay up for obama's speech (nyquil coma) and i still have the 2nd half to watch. so good so far!

i think i was driving behind you on brighton a week or so ago. i recognized you by our twin obama stickers...:)

that's so funny! i keep an eye out for you and your sticker, too...

adam, check out the david brooks link i included in the post. it's really funny.