bean and i played hooky this week. we drove down to cambridge on monday night with minnow, who got to hang out with mom and lulu on tuesday while bean and i spent the day in providence. we took a tour of brown university: 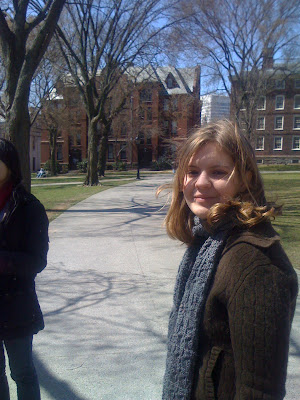 the weather was absolutely perfect (we started out in sweaters and scarves, but we were sweating by the end of the day), and the campus was lovely. our tour guide was knowledgeable and friendly (she even called a friend on her cell phone to answer some of bean's questions about the brown radio station). we really disliked our fellow tour-goers, probably not entirely fairly, and there were LOTS of them. bean liked brown, but she didn't like-like it. she just wants to be friends with it. seriously (or "in all seriousness," as our tour guide said many times), her verdict is that it was her favorite of the colleges she's checked out so far, but she wasn't left just dying to go there. hey, the other thing our tour guide said seven or eight times was the word meiklejohn, which is the brown nickname for freshman peer advisor.

before the campus tour, bean and i discovered a tealuxe right there at the start of thayer street, so we each got a cup of vanilla rooibus to go. afterward, we headed through downtown providence (a couple of times -- i was a wee bit lost) and found a place called julian's, which was pretty good. we ordered lunchy stuff, and i think what they're really well known for is more brunchy stuff (and they'll veganize a bunch of it). so i got a slightly mushy black bean burger, but in retrospect i wished i'd had the vegan pancakes.

back on thayer street, we wandered into stores and paused to drink iced coffee drinks (the first of the season) on the porch of blue state coffee. i got two shots of espresso over ice and added some soy milk, and let me tell you, those shots were absolutely perfect. 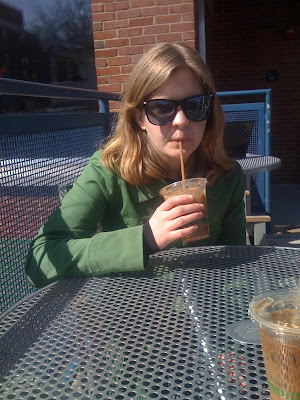 we headed over to the providence place mall, where we shopped a little bit and then went to borders to hear scott read from his new book: 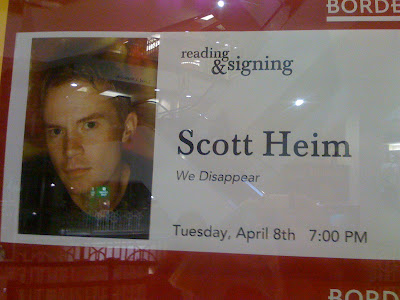 he was amazing, of course, and we were so happy to be there and witness a small group of adoring fans get their books signed afterward. we also got to witness a crazy weirdo kid in a gray hooded nirvana sweatshirt hassle scott obnoxiously and bizarrely. after he read from the beginning of we disappear, the kid said, "that sucked. that sucked, man. that was all perfunctory. that was all maudlin." if it had been possible, scott's adoring fans would have melted this kid with their laser-beam eyeballs. scott himself handled it incredibly gracefully, and the kid slouched away, and the reading continued. i wonder if the kid's s.a.t. vocabulary words of the day were "perfunctory" and "maudlin." or if he just likes to go to readings and insult writers...?
Posted by Liz Woodbury at 6:17 AM

If Z ever wants to hear even more about the Brown radio station, we know a senior at Brown who was a Blunt star in high school and who has been very active in the Brown station....I thought she would like Brown more than that, so I guess my gift of prophecy is a bit shaky.

yay! that would be a great contact. i think she's just not ready to seriously contemplate college yet -- she's a little distracted by her trip next year. maybe we'll go back in the fall of '09.

I love Julian's! A couple of months ago I was in Providence for three days, and I ate at Julian's four times. The vegan pancakes are d'lish!

I loved your Providence report... and even didn't mind reliving the horrors of Mr. Perfunctory/Maudlin. It was soooooooooooooooo great to see you and Zoe!!!