dancer lady and i went to caucus today -- it was to be my first caucus ever! when we drove past portland high school, we were amazed to see lines stretching for blocks and blocks in two directions. so we went to north star cafe and had a coffee before heading back to join the line.

this was the view in front of us when we got in line: 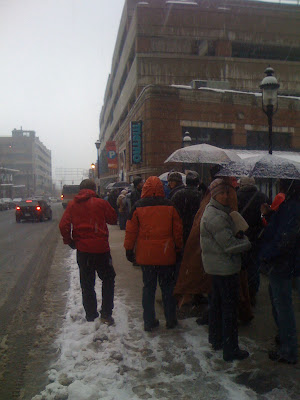 many wise caucus-goers arrived equipped with gloves, hats, boots, and even umbrellas. this was such a smart move, since it was snowing big globby fat wet flakes, and since the line stretched way around the corner and down the street for blocks. also, it really wasn't moving at all. the dancer and i had imagined more of an indoor event, and neither of us had gloves or a hat.

after about forty-five minutes on that street, we moved around the corner to cumberland avenue. our destination was in view! also, the principal of bean's school was just ahead in a fluorescent orange hat, like a beacon of hope. 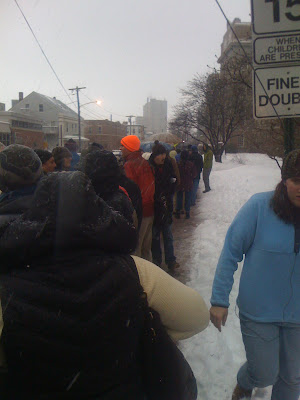 someone had enough time to craft a dozen or so tiny snow people, including these guys in the tree. obama signs and buttons were prevalent. we also saw the occasional hillary sign, and one sad man was still holding a kucinich banner. we didn't break the news to him. 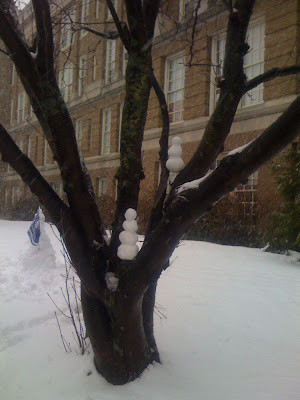 volunteers and election workers wore these red t-shirts. this person announced that the turnout in portland was close to ten times the number expected. they had gotten special dispensation to let us fill out absentee ballots once we got inside if we didn't want to stay and caucus. 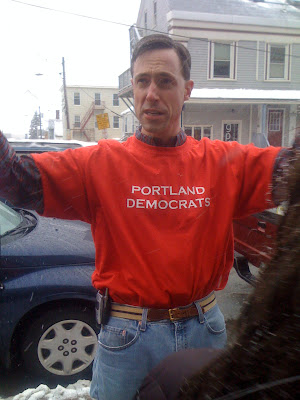 our feet were so cold at this point, but we were nearly there! 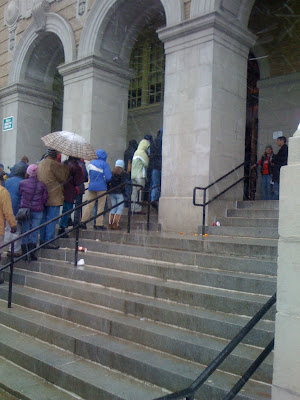 once we got inside, we thanked our lucky stars that we weren't claustrophobic. or, as dancer lady described it, "i don't think i'm claustrophobic..." we followed a line that snaked down a hallway, into a classroom, and then back and forth four times inside the classroom, and then back out the door and back down the same hallway again. when the line went past the windows at the front of the school, we could see the throngs of people still waiting out in the snow: 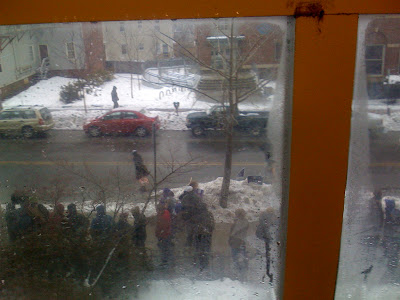 back down the hallway. total time elapsed: 2 hours 45 minutes. 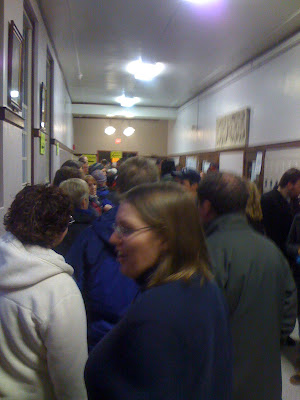 finally, the end of the journey was this "W XYZ" table, where i gave my name and received my very special piece of paper. officially what happens next is you take your piece of paper into a classroom with others in your precinct, and you stand on the side of the room in a group of folks who also like your candidate. however, in this case i was able to write "absentee" on top of my paper, and "OBAMA" on the bottom, and hand it back to the nice lady at the table. 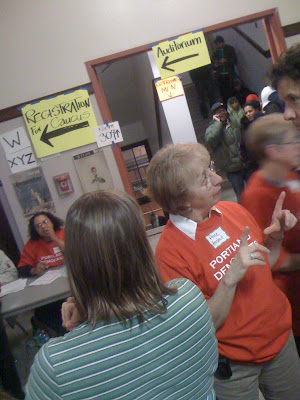 so, i still haven't really caucused yet, but i got really close today! it was pretty thrilling, if cold and wet, took more than three hours, and my back is a little achy from all the standing around. but it was worth it, because obama won!


and then we came back to my house, where m had prepared a mexican feast. also, i baked us a delicious apple-pear galette.
Posted by Liz Woodbury at 9:01 PM

Thank you for standing in the coldcoldcold to represent us all!!!

yay! i was out of town so i missed it (and i am claustaphobic, so i'm not sure how long i'd have lasted). thank you for posting these pictures, i gives me all sorts of warm fuzzy feelings to see that amazing crowd. i'm beyond jazzed. i'm audaciously hopeful...

In Minnesota, we also had record turnouts, but they have lots of little caucuses. My caucus location? Why, my local bar/bowling alley, of course! It was kind of a crazy night, but it was fun to go and participate.

oh wow -- i think they need to have lots of little caucuses here, too, cause this way didn't work all that well. i would have liked mine to be in a bar/bowling alley. or a cafe. or a movie theater...