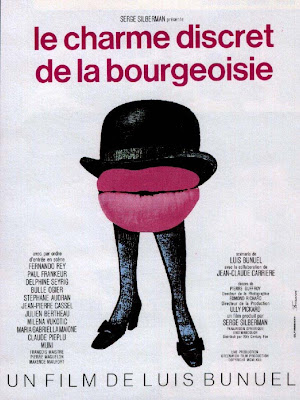 i finally watched this movie, years after borrowing it from a friend and keeping it for months and never viewing it and finally returning it to him -- and years after my (least) favorite crazy customer at casco bay books accused me of being just like the bourgeois characters in the film! yes, indeedy, she was a special lady from the early days of the bookstore who masqueraded as sane while shopping, and who made large purchases of interesting books, thereby fooling me into thinking...you know, that she wasn't INSANE. she would rope me into conversations that became progressively more hostile and insulting, bizarrely. i can hardly even capture what they were like, except that the one in which she mentioned the discreet charm of the bourgeoisie began with her asking me what i thought about the role of first ladies in the white house and ended with her yelling at me, "it's pasty-faced people like you who make the world the way it is!" the last time i ever saw her i was prepared; as she attempted to start a "conversation" with me, i refused to respond except as required to ring up her purchases. when i finally handed her a receipt and smiled and said, "thank you," she grabbed it and said in a crazy-person voice, "thank you. you've been very, very rude!"